Spirited Reflection: Employers as allies with their workers 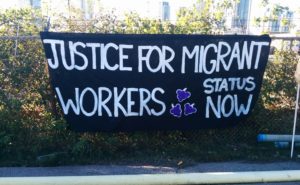 Epiphany continues January 20 with KAIROS reflections based on Light of a Star (digital) (print), the Epiphany Resource.

Ryan was desperate when he lost his job as a restaurant cleaner amid Alberta’s economic recession and faced possible removal to his native Philippines. Then the temporary foreign worker said he found an ad from a Toronto-based placement agency which recruits workers for nursing homes, construction, agriculture, factories, meat packing plants, hotels and restaurants. Ryan said he was told by the agency’s owner that a farm in East Gwillimbury was looking for mushroom pickers. For nine months, from April 2016 to January 2017, he says he worked at the mushroom farm on a visitor visa instead of a work permit. He is now among a group of Filipino workers suing the placement agency and the mushroom farm in small claims court, alleging they were improperly charged thousands of dollars in fees for legal advice and “labour market impact assessments,” which are a prerequisite for the work permits they never received. They are asking for refunds. The employer, not the workers, “has the sole responsibility in paying the cost for the processing and application fees to secure a positive labour market impact assessment,” the workers say in the statement of claim.
(The Toronto Star, 2018)

Employers can be key allies and advocates in upholding the rights of migrant workers. Any contract to have a Canadian position filled by a temporary foreign worker is a contract between a sending government, a receiving government, a worker and an employer. In a proper contract, each party has rights and responsibilities. The employer has significant responsibilities such as payment of application fees and transportation, providing decent housing and enrolling the worker in a health insurance plan. If the employer fails to meet their responsibilities, they have abused the rights of the worker.

Employers are in a perfect position to advocate on behalf of migrant workers because they understand the Temporary Foreign Worker Program and its shortcomings. An ethical boss can see where a program and its implementation could leave a worker vulnerable to abuse. That boss then has the opportunity to showcase best practices, educate business associates, and advocate for better policies and stronger enforcement.

A fish processing company on Deer Island, NB became an exemplary employer in the wake of their own disaster. The Paturel International plant was destroyed by fire in March 2018. This company employed many migrant workers whose work permits were tied to this company. The workers could see that it would take many months or years to rebuild the plant. They feared they would be removed from the country because they did not have work permits to work elsewhere, or any immediate job prospects. In addition to ensuring that the workers received short-term support for immediate needs, the employer worked with the government to see the transfer of work permits to other employers in the area.

Creator, you have given a variety of gifts for the common good. Help us to use these gifts both within and beyond our faith communities to work for the good of all people. Forgive us for the times when we have been complicit in violating human rights. Give us courage and fortitude to push those in power toward justice and accountability.

Steadfast God, you declare that all people may take refuge in the shadow of your wings. May we participate in your promise of refuge by making our communities a shelter and home to those in need.

Extravagant God, we pray for a world where all people can celebrate and rejoice in your abundant grace; where people in and from every place can enjoy their inherent rights and dignity.

This reflection was a compilation from the some of the Epiphany team of writers: Rev. Dr. Sarah Travis, Rev. Laura Sauder, Carolyn Pogue, Connie Sorio, Elena Tkacheva, Anna Jacobs, and Shannon Neufeldt.