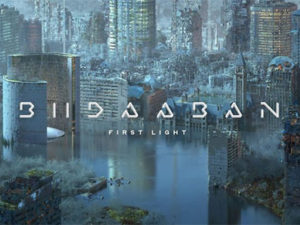 Mark 13:1 As he came out of the temple, one of his disciples said to him, “Look, Teacher, what large stones and what large buildings!”

2 Then Jesus asked him, “Do you see these great buildings? Not one stone will be left here upon another; all will be thrown down.”

How hard is it to imagine a different reality? For anyone with a grasp of history or current affairs, it’s easy to imagine things getting worse. Chances are, if you’re reading this, you’ve been paying attention and can recite a frightening list of worsening trends in human societies and habitat. At times like this, our wonderful human capacity for storytelling and meaning-making is strained. It’s great for the entertainment industry – gritty dystopias make good TV. But imagining a better reality seems a hopeless distraction, a naive fantasy.

Earlier this year I donned a Virtual Reality headset in downtown Toronto and opened my eyes to a new view of the city– Biidaaban. Above me towered familiar buildings, now eroded and worn, bearing vines and fungus. The sidewalk was torn up for the planting of crops. A river flowed through the subway tunnel and down streets empty of cars. Birdsong, wind, and the words of the Wyandot, Kanien’kehá:ka and Anishinaabe peoples flowed past me with these visions, one by one.

This Virtual Reality piece Biidaaban: First Light showed a familiar, yet utterly alien Toronto. At first, the vision of the crumbling city, overgrown and wild, seemed to be desolation and destruction. Yet life is everywhere. Only the dominance of human life has disappeared. This is a vision of regeneration that replaces the settler-colonial dream of humanity triumphing over nature.

I am tempted to call this an apocalypse, evoking both the popular meaning of ‘great catastrophe’, and the ancient tradition of literature using fantastic symbols and images to expose supremacy myths and reveal the truth.

Revealing the truth requires recognizing trauma and violence we might wish to ignore. In our time, this is the reality of human supremacy, with its arrogance and exploitation of the rest of creation. The ongoing mass species extinction is a catastrophe greater yet than the ever-increasing floods, droughts and hurricanes. Climate change is a reality. It is not a question of stopping it any more, but of surviving. Apocalypse allows us to recognise and mourn these evils, but without being lost in our pain. It gives meaning to both suffering and survival.

Biidaaban: First Light invites these apocalyptic narratives, as participants remove their headset and find themselves again immersed in settler-colonial, human-centred existence, and contemplate the fears and hopes of the vision.

Jesus offers his own revelation of a city overthrown, and it is equally disturbing. He offers his disciples cold comfort, telling them not to be alarmed by frightening rumours; not because they are false, but because these things are not the end. The purpose of apocalypse is not comfort, but to face a disturbing future. The revelations recorded throughout Scripture, from the Apocalypse of Daniel, the teachings of Jesus, and the Revelation to John of Patmos, share the simple message that those called to follow God must persevere and stand firm, even when surrounded by violence, horror, and death. To these we can add the wisdom and perception of other traditions that have persevered through crisis and loss.

Mark 13:3 When he was sitting on the Mount of Olives opposite the temple, Peter, James, John, and Andrew asked him privately,

4 “Tell us, when will this be, and what will be the sign that all these things are about to be accomplished?”

5 Then Jesus began to say to them, “Beware that no one leads you astray.

6 Many will come in my name and say, ‘I am he!’ and they will lead many astray.

7 When you hear of wars and rumors of wars, do not be alarmed; this must take place, but the end is still to come.

8 For nation will rise against nation, and kingdom against kingdom; there will be earthquakes in various places; there will be famines. This is but the beginning of the birthpangs.

It is hard to imagine a realistic future where things get better, and impossible to imagine everything staying the same, so we must open to a future that will break with our expectations. It may be shocking. It may seem like failure and collapse. And yet at this moment our systems are failing and collapsing and imperilling human and more-than-human life alike.

The fact is that the future looks scary. Climate change, nationalism, settler-colonialism, and profit-driven extractive industries are causing irreversible, undeniable damage to the health of the ecosystem that has sustained human existence and vitality since time immemorial. Nonetheless, we must persist in goodness and openness to seeing what lies ahead, even to the frightening possibility that there IS a future that looks nothing like what has come before.

The link to the trailer and this Virtual Reality Project.

Peter Haresnape is the National Coordinator (General Secretary) of the Student Christian Movement of Canada, an ecumenical justice-focused movement that works with students and young people to put into practice the liberating faith of Jesus.