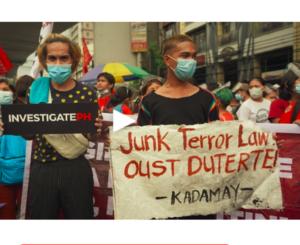 In its first report, released on March 16, Investigate PH warns of intensified political repression in the Philippines since the summer, fueled by the recently enacted Anti-Terrorism Act, and the brutal implementation of a National Task Force to End Local Communist Armed Conflict.

The report, which is the first in a series that will be submitted to the UN Human Rights Council 48th Session in September 2021, also warns of continued lack of domestic remedies and mechanisms to address human rights violations.

The launch of this critical report came on the heals of a series of military operations that killed nine labour and Indigenous leaders and human rights activists from March 4 to 7. In response to these brutal killings, now dubbed ‘Bloody Sunday’, KAIROS has joined with 65 Canadian civil society organizations and numerous prominent individuals in an Open letter to the Prime Minister stating that the time for quiet diplomacy with Philippine President Rodrigo Duterte’s regime is over. Canada must speak up loudly against the rapidly deteriorating human rights situation in the Philippines.

Investigate PH is an independent global initiative concerned with the human rights situation and growing impunity in the Philippines. It has launched the Independent International Commission of Investigation into Human Rights Violations in the Philippines which will release reports that coincide with sessions of the United Nations Human Rights Council. Two more reports will follow in July and September.

KAIROS is privileged to be represented on this International Commission by Marie Claude Manga, a member of KAIROS’ Partnership and Rights circle. Maria Claude was a member of the KAIROS delegation to the Philippines and continues to work actively for human rights in that country.

“This report not only exposed the existence of serious cases of abuse and crimes against humanity perpetrated against local populations, it also highlighted the involvement of the Philippine government, at all levels, and its allies (multinationals and others) in the organization and execution of these atrocities,” said Marie Claude.

Investigate PH aims to further substantiate the landmark June 2020 report of the Office of the United Nations High Commissioner for Human Rights on the Philippine rights situation and to urge relevant UN bodies to make use of international mechanisms to hold perpetrators of human rights violations in the Philippines accountable for these violations and to deliver justice to victims.

It is critically urgent that the international community, including the Canadian government, grasp the gravity of the human rights abuses taking place in the Philippines today.