KAIROS decries recent raids and massacre in the Philippines 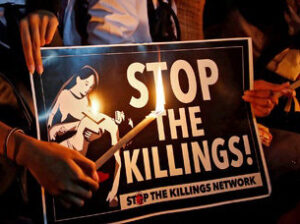 KAIROS is deeply concerned about the escalating human rights crisis and ongoing impunity in the Philippines.  We join partners in the Philippines and civil society organizations in Canada and around the world in condemning the recent raids and massacre, now known as the Bloody Sunday raids. These chilling events happened on Sunday in the provinces of Cavite, Laguna, Batangas, and Rizal, all located southeast of the country’s capital. As we grieve the loss of life, we call for accountability from President Duterte and the state forces of the Philippines.  We also appeal to the Canadian government to speak out for human rights in the Philippines and to denounces these killings.

“On March 7, a day before International Women’s Day, coordinated “tokhang” style raids by the police and the military in Calabarzon, resulted in the death of nine activists and arrests of six others. Most were killed in their homes but the police claimed that there was an “armed encounter” and the alleged members of “communist terrorist groups” fought back (nanlaban). Prior to this, on March 4, two union leaders were arrested in Santa Rosa and in San Pablo City, Laguna, respectively.”

The statement ends with the following call:

“We call on the government, especially those in the security sector, to fully respect human rights and strive to protect God’s gift of human dignity. We also call on the Filipino people to pray and work for the resumption of the peace talks between the government and the NDFP. Like the vaccine, which is a crucial solution to the COVID-19 pandemic, principled negotiations that address the roots of the armed conflict in our country are likewise the best option for a people-centered peace settlement. It is written: “For God is not a God of disorder but of peace —as in all the congregations of the Lord’s people.” (1 Corinthians 14:33)”

KAIROS continues to work with member churches, human rights organizations and partners in the Philippines on joint advocacy and action in response to this urgent situation.

At least 300 farmers, indigenous people, human rights defenders, including 55 lawyers and judges, have been killed since Duterte came to power.

Respect for human rights and God’s gift of human dignity,  cornerstone for peaceDownload

Statement from our partner EcuVoice in the Philippines

Horrendous killings on the day of the LordDownload
Filed in: Asia-Pacific, Gender Justice/Women of Courage