The OFP Calls for a National State of Emergency 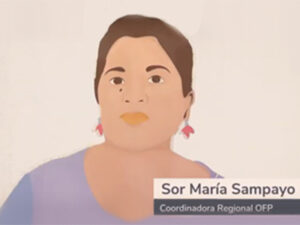 This fall marks both the 20th anniversary of the United Nations Security Council’s Resolution 1325 and the fourth anniversary of the ratification of the Peace Accords in Colombia between the government and the former guerrilla group, the FARC. Integrating some of UNSCR 1325’s recommendations, Colombia’s Peace Accords have been heralded for their attention to the gendered impacts of war and the need for a gender-based lens for peace. A new report by the Organización Femenina Popular (OFP), a KAIROS Women of Courage: Women, Peace, and Security partner, provides a disquieting analysis of the human rights situation in Colombia. The report details the challenges women and youth face in the Magdalena Medio region where the COVID-19 pandemic confirms the dire effects of preexisting and emerging institutional weaknesses, including the Colombian state’s refusal to commit to a peace by and for the people.

Based on a series of dialogues with women leaders and a survey and conversations conducted with youth, the OFP outlines the local repercussions of this national crisis. The conflict continues unabated as social leaders are routinely targeted and killed by armed groups while the number of reported massacres grows. There has also been an upsurge in gender-based violence. A quest for dominance and control over a territory known for its resources fueled by patriarchy is driving much of this violence. As the OFP states:

“The restructuring of illegal armed groups, disputes over control of illegal economies—linked to the presence of the National Liberation Army and the obstruction of the implementation of the peace accords—in addition to the longstanding reality of rural poverty, political exclusion, and the deepening of the neoliberal extractivist model that aggravate the conditions of life for residents of rural areas result in a region that continues to experience violence as it is a scene of dispute between different armed actors, allied with groups with political and business ties.”

According to the OFP, the amassing of power through the violent accumulation of territory is at the epicenter of gender differentiated inequities along the Magdalena Medio. Gender-based and sexual violence, child recruitment, persecution, displacement, and discrimination are some of the dangers that women regularly face. Venezuelan migrant women in the region are especially at risk of sexual exploitation and trafficking and experience stigmatization and discrimination.

Amid this context, which now includes the current global pandemic, the state’s absence in the region is indisputable. The lack of social and health services and economic support are having negative effects on women and youth’s food security as well as mental and emotional wellbeing. Public health measures in place since March to contain the spread of COVID-19 have had an impact on the informal labor sector, which is typically overrepresented by women. And due to the state’s absence, armed groups are operating in the region, sometimes even imposing their own curfews among the local population.

Under these conditions, the OFP presents eight alerts specific to the region of the Magdalena Medio:

To confront the current human rights situation on the ground, the OFP demands an official declaration of a National State of Emergency. The OFP asserts that such a declaration must be accompanied by the creation and implementation of a plan that transcends militarization and that attends to the differentiated causes of violence, specifically in the lives of women and youth. Further, the OFP rejects any plan based on the concentration of power and with authoritarian aims. Instead, the OFP holds that the Colombian state must be pressured at the local, regional, and national levels and encourages continued grassroots efforts to mobilize in the defense of human rights. Finally, the OFP compels state institutions operating at the local level to work towards the achievement of their mandates to deal with the issues facing women, youth, and their communities.

The OFP’s report serves as a diagnosis and an emergency call. KAIROS urges the Colombian and Canadian governments to take note and act swiftly.

Specifically, KAIROS urges the Canadian government to advocate with the Colombian government to recognize this National State of Emergency. In the context of the anniversary of UNSCR 1325 and the Colombian peace process, Canada must use its voice and influence at the UN to call for an increase in the number of spaces available for women to participate in peace processes in Colombia at all levels – local, national and international, and to ensure that their lives and rights are protected. Furthermore, KAIROS calls on the Government of Canada to mandate the implementation of Voices at Risk: Canada’s Guidelines on Supporting Human Rights Defenders at its missions and take up the recommendations of Raising her Voice: Confronting the Unique Challenges Facing Women Human Rights Defenders, published by the Sub-Committee on International Human Rights of the Foreign Affairs Committee of the House of Commons in June 2019.

The report is available in SpanishDownload
Filed in: Gender Justice/Women of Courage, Latin America