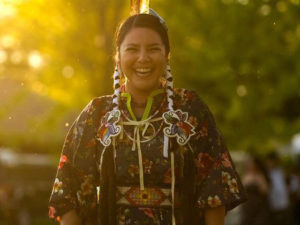 There are specific days that I remember, which forever changed my understanding and perspectives about being a First Nations woman in Canada. Like so many in this country, I grew up with the cliched ideas of Canadian society-polite people surrounded by clean cities and natural beauty preserved like images on postage stamps. Having spent my life between Thunder Bay, Ottawa, and Montreal, with a handful of small towns like Caramat and Winchester in between, there was a naivete that I carried with me as a person with white privilege. I truly believed that if I did not cause harm to others, no one would harm me.

The first time I saw shades of risk, I was working at the Youth Services Bureau of Ottawa and a young woman name Elena Assam-Thunderbird was murdered. I didn’t know her, but of her, as many Indigenous folks can tell you, we recognize those of our own communities. It was June 2002 and what happened was shocking in its brutality. The realization that a 17 year-old-girl could be removed from her family in such a way was shattering. As the details unfolded in the newspapers, I couldn’t help but draw comparisons to the similar risks I had taken, at the time I was a 20-year-old single mother of one, myself dating and meeting strangers at public events and group gatherings. Elena hadn’t done anything wrong but trust someone who was a predator. The headlines attempted to make the public believe otherwise, bridging connections to social determinants for youth at-risk and poverty. I was surrounded by her friends and loved ones, constantly harmed by the public suggestions that Elena had somehow warranted her own murder by being Indigenous, by being poor, by not being careful enough, by smoking cannabis, or by choosing to take part in other typical teenage behaviours. I began to form ideas of how an Indigenous woman can be blamed for her own trauma.

The next time I was conscious of how much danger existed was the day I learned I was expecting a daughter. There was a different fear that went along with knowing I was responsible for keeping my Indigenous girl safe. I knew immediately that I had to teach her to be strong-willed and confident in her own intentions and actions. Unlike the gentleness I nurtured in my son, my daughtered needed to be hard to weather the advances and assumptions, the social turmoil and interpretation that awaited her every move. She would never be as naïve as her mother.

So, I went to the circle formed at my local Indigenous women’s support centre and asked the circle to advise me on how to raise a strong Indigenous woman. I shared with them my fears of inadequacy, the naivete I had come from. Where could I turn to strengthen my own direction? How could I keep her from harm when the world is designed to hurt her? While I never managed to answer the last question, I did find strength and love in that circle. The women recognized my fears as their own; they offered their care and support to me as a member of their community. My girl grew inside of me, entrenched in our ancestral strength and indigeneity.

The 2015 murder of my friend Gail Fawcett shook me to my core. I had met Gail when we both worked at Minwaashin Lodge-the Indigenous Women’s Support Centre in Ottawa. Our work responsibilities had us making monthly trips to Costco together for the organization and we soon became fast friends. Ever the matriarch, Gail’s personality was made of a kindness that only a truly good Auntie can exude. She cared about others and we connected over our lived experiences as single parents. By the time we had both moved on from the organization, our visits grew further apart and the last few times we ran into each other, big hugs and promises to connect were easy, but our schedules and exhaustion from living our day-to-day lives were more difficult to manoeuvre. Those last, brief exchanges I often reflect on. We both thought we had more time. I’ll never forget the pain I felt when the news and details of her demise was plastered throughout the news. Her ending was so violent; the sheer recall for this writing has brought me to tears.

When my youngest sister began frequenting city streets with her friends, I was compelled by fear to speak with her about the risks involved. I shared statistics and scenarios with her, urging her to practice as much safety as she could. I wished her to enjoy youth like any other teen but couldn’t help feeling the weight of the dangers posed by our society.

Once more, with the current state of the world, I am forced to consider how society strives to eradicate the existence and power of Indigenous women. They are defending our planet with their bodies, facing violence and harm caused by a society which does not value their contributions and resilience. Even as the world remains cloistered within homes and only the essential and minimum is underway, Indigenous women are being harmed, going missing and being murdered.

Chrystal Waban is an Indigenous matriarch, daughter, sister, auntie and friend. She is also the Indigenous Rights Program Coordinator for KAIROS Canada,  and urges everyone to visit the MMIWG information hub, as well as the MMIWG Calls to Justice.