Spirited Reflection: What it means to walk on stolen land 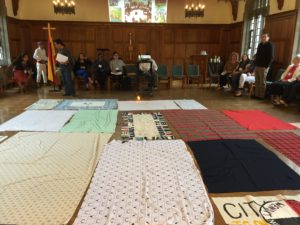 As the daughter of two Nicaraguan immigrants, I am no stranger to stories of U.S.-backed dictatorships and their massacres. The stories told during the Guatemalan KAIROS Blanket Exercise made me cry anyway.

I stood inside Emmanuel College at the University of Toronto some weeks ago, and I listened as our Guatemalan brothers and sisters shared a history not too different from today’s headlines.

This exercise reaffirmed for me that not much has changed since the arrival of Columbus. The colonizer is the same in his ruthless tactics and insatiability.

He continues to force people off their lands because sooner or later this proves to be the surest way to kill them.

And to this day he cannot get enough land.

It may be the 1970s, and he is financing the Rio Negro massacres to clear the way for a dam in Guatemala’s Chixoy River. Perhaps its 2019, and he is building another ‘energy project’ in Muskrat Falls, Newfoundland and Labrador.

No matter where or through what means, he cannot take enough.

He continues to separate Indigenous mothers from their children, severing their cultural roots, and perpetuating generations of broken men and women.

At this exercise I stood alongside a few other participants on a single blanket. We were told that we represented the 54,633 children assassinated during Guatemala’s civil war. With this we were asked to step aside.

In this moment I felt as though their deaths came crashing down upon us, filling the room with their echo though we appeared to be in silence.

The colonizer (or in this case the American government) has not stopped making life unlivable for Indigenous families. In more recent times, those who once lived in Central America marched for their lives until they reached his borders in the United States. Now he has detained them in concentration camps where families have been ripped apart and children have died.

But how easily are Indigenous children killed.

After the main portion of the Blanket Exercise, we sat in a circle and shared our reflections.

One woman said that she felt ashamed for not learning the true history of Guatemala. She apologized. After listening to her, I thought to myself that although we are divided in the context of a colonized world, there is room for resistance in our choices about what we accept as truth.

There is also room for love, when we step into the role of someone who suffered a fate we have been spared.

While the colonizer sustains his power through a divide entrenched in his vessels of information, his laws, his education and guarded borders, we can rearrange ourselves to subvert these forces.

We can step out of what makes us comfortable and into another moment in time. We can open ourselves to the stories the powerful have tried to bury, to the voices of those cast aside, until we are united in the truth of what it means to walk on stolen land.

Madalene Arias is a writer based in Toronto. She is passionate about migrant justice, Indigenous rights and protecting our beautiful planet.