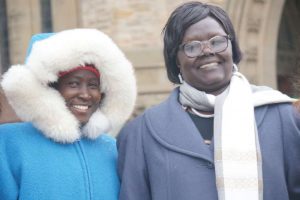 OTTAWA – If there’s one message two women leaders from South Sudan can take back to their war-torn country, it’s that they are not alone in their fight to end gender-based violence.

The tour, sponsored by Kairos Ecumenical Justice Initiatives in collaboration with Development and Peace and Amnesty International, marked the 16 Days of Activism Against Gender-based Violence, an international effort not widely known in Canada. The seven-city tour included meetings with Indigenous women to share their experience of reconciliation.

“What we have learned in Canada, we have to learn to forgive, so we can get healed and become ourselves,” said Anges Wasuk Petia, a Catholic who coordinates the National Women’s Program of the South Sudan Council of Churches (SSCC). “The youth need to be strong, to understand who they are and what they live for.”

South Sudan came into independent existence in 2011 after decades of civil war in Sudan between its Muslim-dominated north and its largely Christian and Animist south. But since the formation of the new country, ethnic violence has broken out among various tribes.

Women and children are especially vulnerable, Petia said. “They have a lot of responsibilities to hide their families from the conflict.”

In the process of running to hide, they can be exposed to gender-based violence and hunger.

“They are seeing their sons and daughters dying,” she said. “There is no freedom of movement, so they can’t go to areas where they can cultivate big farms.”

Petia explained people in South Sudan live in towns and villages, then walk several kilometres to plots of land to farm, but it is no longer safe to leave the towns.

In addition, South Sudan has experienced two years of drought. In the areas where there is rain, the people are not able to bring their crops to the big towns, where people are most affected by hunger.

The purpose of the tour was to “share with Canada and learn from the Canadian experience on violence and violations of human rights,” Petia said. They also hoped to engage the Canadian government, NGOs and people of good will “to support the grassroots women’s peace process.”

“When you feel like you are helpless and being violated,” it is difficult to see what can be done, Petia said. “We will go and tell the people some of the issues are global.”

Awak Hussein Deng, youth coordinator for the SSCC, and a representative of the Evangelical Church, said the South Sudan churches council offers youth 35 and under a range of seminars on leadership development, combating gender-based violence, and help for women and girls to develop economic self-sufficiency.

Petia said representatives from the SSCC also visit displaced persons camps to ensure the most vulnerable who can’t help themselves get access to food and help.
The SSCC also offers workshops for trauma healing, where people who have been violated and women who have been raped can “come out to speak,” Petia said. The workshops give “the person the knowledge of her potential when healed.”

Petia said they felt welcomed by the people of Canada. “We feel they are putting themselves in the same shoes to understand us.”

Petia said her experience in Canada showed her there are “violations of human rights everywhere,” but “here people can speak openly. In South Sudan it’s a bit risky.”

Written by Deborah Gyapong.  Originally published in the Canadian Catholic News on December 18, 2017.
Filed in: Africa, Gender Justice/Women of Courage