Paddling for the Peace and its people 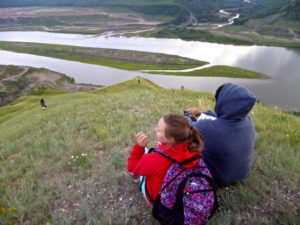 Participating in the BC-Yukon KAIROS Rolling Justice Bus, July 7-11, was an exciting and wonderful opportunity to connect with individuals from different walks of life as we rallied together against the proposed Site-C Dam on the Peace River in north-eastern British Columbia.

For the first time, the Rolling Justice Bus – with 45 on board – joined Paddle for the Peace, an 11-year-old event hosted by the Peace Valley Environment Association and West Moberly First Nation that brings hundreds of people from all over the province to the Peace River near Fort St. John.

Our first stop was the 48-year-old WAC Bennett dam. We learned of the immense impact the dam had on wildlife, how it destroyed habitat, as well as how it disrupted First Nations communities, and negatively impacted their modes of subsistence, their ways of being, and their connections with other communities. We also learned about what ’consultation’ with First Nations meant to BC Hydro at the time: close to nothing at all.

It became apparent that with Site-C, BC Hydro is repeating the mistakes it made with dams like WAC Bennett.

Site-C is a bad idea. From every perspective – economically, sustainably, environmentally, ecologically and socially – the facts are stacked up against it. What is BC Hydro doing? One can’t put off the feeling that this is a power play, that there is something going on behind the scenes and we will all have to pay should control of our water and electricity fall into private hands.

During our tour we heard heartbreaking stories from farmers like the Boons who have been on the land for generations, but are told that if they don’t come to a settlement or leave their land by Christmas, BC Hydro will do what it has to do – build a highway through their home.

We also heard of people imprisoned and slapped with lawsuits for protesting the dam and/or standing up for their Treaty rights. We learned how ’divide and conquer’ tactics are disturbing the peace in the valley, divvying up First Nation communities and non-Indigenous communities, and forcing them to pick sides against each other.

The proposed Site-C dam is something that affects us all in one way or another and it is our duty, my duty, to stand up for those people who are being silenced in isolated northern BC.

My heart was also moved by the warmth and generosity of the people who were so enthusiastic and excited to welcome us into their community. What soon became evident on this journey was that we as the body of Christ must work together on this journey of truth and reconciliation, which includes honouring the UN Declaration on the Rights of Indigenous Peoples.

Recently, KAIROS published a letter to Prime Minister Trudeau and the BC Premier urging them to suspend construction of the Site C dam until the Indigenous peoples are able to exercise their right to free, prior and informed consent and there has been a thorough, arms-length review by the BC Utilities Commission.

I invite all peoples of faith to lend their support for this call. I can tell you first hand, the people of the Peace need all the help they can get. Please lend your voice to theirs. Please join us in solidarity against the Site C dam.

By Andrea Dsouza, Youth and Young Adults for Development and Peace for BC and Yukon. Andrea is currently taking First Nations and Indigenous Studies at the University of British Columbia.