Current Violence and Military Action in Israel and Palestine 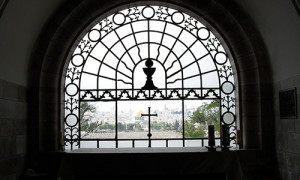 View from the Mount of Olives, where Jesus wept over Jerusalem. Photo: KAIROS

In response to the violence and military activity in Israel and Palestine, KAIROS: Canadian Ecumenical Justice Initiatives continues to seek a just and lasting peace between Israelis and Palestinians. The escalation of violence will not achieve either peace or security for Israel and Palestine.  Such a peace requires an end to Israel’s illegal occupation of the Palestinian Territories and related actions such as the blockade of Gaza.

Acts against civilians have occurred on both sides. Hundreds of rocket attacks from Gaza into Israel are being met with a disproportionate military response, including missiles, offshore shelling, and the raising of reserves to facilitate a possible ground offensive.  This occurs within the context of Israel’s blockade of Gaza, now in its eighth year, that has denied Gaza’s population mobility, access to markets, and employment. The United Nations Relief and Works Agency (UNRWA) in Gaza observes that the majority of the population cannot meet basic needs without humanitarian assistance, and the number of Palestinians depending on UNRWA for food aid has increased from 80,000 in 2000 to over 830,000 currently.

According to a July 15 update from UNRWA, 174 Palestinians had been killed, including 32 children. 1152 had been injured. The destruction of hundreds of houses, and warnings of pending destruction from the Israeli Defence Force (IDF), have resulted in 17000 people fleeing their homes and seeking shelter with UNRWA.

At this time, no Israeli deaths have been reported, but that does not detract from the fear, destruction, and potential for death that the rocket attacks invoke.

We condemn the use of violence. We mourn for all those who have been killed. We pray for healing of the wounded and afraid.

This situation is untenable. We appeal to all involved in these attacks, from Israel and from Gaza, to live up to their obligation under international humanitarian law to protect civilian life, and to take up the ceasefire proposed by the majority of the international community. Both sides need to agree to a ceasefire and to address issues that are at the root of the conflict.

On July 10, the Justice and Peace Commission of the Assembly of Catholic Ordinaries in the Holy Land issued a statement on the crisis and observed that “Breaking out of the cycle of violence is the duty of all, oppressors and oppressed, victims and victimizers. In order to commit themselves to this aim, all must recognize in the other a brother or sister to be loved and cherished rather than an enemy to be hated and eliminated.”