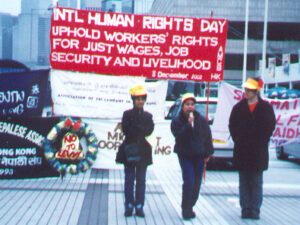 I started working for KAIROS in November 1997 when it wasn’t yet called KAIROS. I was employed by the Inter-Church Action for Development, Relief and Justice (ICA), which served as the ecumenical funding arm of the churches and was one of the ten ecumenical organizations that became KAIROS in 2001.

I served as the ICA’s office and finance administrator, reporting on Canadian International Development Agency (CIDA) funds and supporting coordinators who were liaising with overseas partners. When the organizations amalgamated, I became KAIROS’ Asia Pacific Partnerships Coordinator, with a focus on migrant justice and human rights in the region.

I had a personal connection to this issue, coming from the Philippines where the business of sending workers overseas had become lucrative for private entrepreneurs and generated revenue for the government.

When I moved to Canada in 1989, I was hearing negative stories about migrant Filipino caregivers from the diaspora community. The Philippines was one of the top sources of caregivers in Canada, and expats from the Philippines, particularly women, were assumed to be associated with live-in caregivers. I was often mistaken for one.

This ignited my curiosity to find out more about caregivers and the Temporary Foreign Workers Program. I would soon learn about the challenges and dangers workers face, including the deep pain of family separation. I would also learn that the mere desire to support their families gave caregivers the resilience, courage and strength to face unknown risks.

I started befriending caregivers and joining advocacy campaigns to support them and the demand for permanent residency.

The initial work in Canada also focused on refugees but that was soon dropped to focus on migrant justice, due to limited staff capacity.

We actively participated in international conferences and gatherings related to the Global Forum for Migration Development. As we supported these organizations outside of Canada, we began to ask how we could strengthen our work within the country by addressing the injustices embedded in the Temporary Foreign Workers Program that was causing so much harm to migrant workers, including abuse and exploitation. We also wanted to strengthen our support for migrant caregivers living in Canada.

In 2006, we organized the first national gathering for migrant justice at York University which attracted approximately 300 participants. This brought together our global partners, migrant organizations and unions, church groups and community organizations working on this issue.

This was the first conference of its kind in Canada. It was really, the first time that migrant support groups – including farm workers and caregivers – came together.

The gendered division of the two sectors were clear at the gathering. Farm workers were typically men and caregivers were typically women. But they were quick to see the commonalities of their issues and wanted to support each other and advocate for their rights.

After the Toronto gathering, about seven of us travelled to Ottawa to meet with government agencies overseeing temporary foreign workers, Members of Parliament and CIDA representatives.

Then as now, we called for permanent residency. We also urged the government to remove the live-in requirement for caregivers to mitigate abuse and exploitation of vulnerable workers forced to live with their employers. CIDA officials told us that the agency became informed of the issues facing migrant workers because of our advocacy work.

Reflecting on the present and past, I would say that the strength of our work is advocacy and supporting and building strong relations with workers.

In the past decade KAIROS responded to requests for help from migrant workers and advocated on their behalf to the federal government. We provide workers with the space to speak firsthand about their situations. When opportunities allow, we bring them to roundtables with government agencies and officials and let them do the talking while we remain in the background.

Due to the advocacy efforts of KAIROS and other organizations, the federal government introduced programs to address some of these egregious problems.

In 2018, Canada repealed the four year-in and four year-out rule for temporary foreign workers. Under this rule, migrant workers who worked in Canada for four years became ineligible to work here during the following four years. Many workers became undocumented as a result with their applications for permanent status in limbo.

The following year, Canada launched a pilot program for migrant caregivers that includes full permanent residence status after working in Canada for two years. For the first time, it provides occupation-specific work permits, enabling caregivers to change jobs quickly and easily to escape abusive conditions without fear of deportation. The program also allows open work permits for spouses and common-law partners, and study permits for dependent children, so that caregivers’ families may accompany them to Canada.

The government also brought in the Open Work Permit for Workers at Risk so that workers may leave abusive situations. However, the onus is on the workers to provide proof of abuse and there is no guarantee the permit will be granted.

The government has launched additional initiatives to help the workers, some helpful and others fraught with problems. At this time of writing, KAIROS continues to flag these issues with the federal government.

Since 2020, KAIROS’ Migrant Justice program shifted its focus towards pandemic-related direct support, in partnership with other migrant-focused organizations.

During the pandemic’s early days, it was clear that there was little-to-no government support for temporary foreign workers, particularly those who lost status because they fell through the cracks of the complex Temporary Foreign Workers Program. KAIROS initiated a series of information webinars, which brought in migrant workers, to highlight the impact of the pandemic on them. Listening to migrant workers we wanted to do more to help them through this difficult time. In December 2020, KAIROS received $2.1M in funding by the Government of Canada’s Temporary Foreign Worker Program over a six-month period to assist temporary foreign workers who are affected by COVID. The project targets the Maritimes and Ontario. The program has been successful and prompted the federal government to extend it to the spring of 2022 with additional funding.

A cornerstone of the project is supporting our community partners’ vital work in responding directly to the emergency and the needs of migrant farm workers and other sectors.

This is what KAIROS is about: partnerships with community organizations that are responding to relevant, critical, and timely issues. Many of our partners are grassroots organizations with limited access to funding. KAIROS serves as a conduit between government and small organizations, helping them to build capacity and reach more people in need.

It is worth noting that many of the workers coming to Canada are from Christian countries. When faced with difficulties and challenges, the churches have been a spiritual and emotional refuge, and some of our partners are local churches that support workers in their area.

The commitment to do justice along side migrant workers and vulnerable people is what we are called to do, to live our Christian faith by doing good and taking risks.

There is great potential for KAIROS to lift the question: why are we treating people as having lesser rights and dignity than us, including those we depend on for essential services?

I hope that by 2041 we will look back and note that in the early 2020s, the Canadian government finally ended the Temporary Foreign Worker Program and granted permanent residency to overseas workers working in critical sectors such as food, caregiving and others.

The pandemic has been an ‘aha’ moment regarding migrant workers, to not take for granted their invaluable contributions to Canada. These are kairos times and momentum is building to realize our decades-old call for permanent residency.

We can’t wait another 20 years to finally help safeguard the rights and wellbeing of essential workers and end the uncertainty of being on a temporary status.