Seeds of Truth: The KAIROS Blanket Exercise through Guatemalan eyes 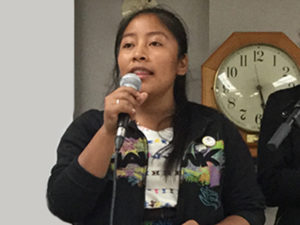 Excerpts from an Interview with Lilian Bolvito Gonzalez on Radio Canada International, June 24, 2017

Radio Canada: We will now chat with a Guatemalan youth who participated in the Blanket Exercise on June 2 on Parliament Hill in Ottawa. Her name is Lilian Marleny Bolvito Gonzalez.  Welcome Lilian to Radio Canada International.

Can you tell us about your experience being on Parliament Hill on June 2, as you participated in the Blanket Exercise?

Lilian:  It was a surprising experience for me. I was not expecting it. I really appreciated that there was a lot of participation from Indigenous communities, along with KAIROS, and Breaking the Silence.

Radio Canada:  What did you do exactly on that day in Ottawa?

Lilian:  On that day, we carried out the activity on Parliament Hill, and I joined the group that was doing the Blanket Exercise. This exercise allowed me to get a good understanding of the history of Canada – how it was invaded, and how Indigenous Peoples were treated.

Radio Canada:  How were they treated?

Lilian: There was a lot of racism. Their lands were invaded, as were their languages. I learned about residential schools, which really affected the communities, and how a part of their territory and their culture was taken from them.

Radio Canada: Did you find similarities with the history of Maya Peoples in Guatemala?

Lilian: Certainly. It was shocking for me to read the script, which is available in Spanish. There are a lot of similarities. In Guatemala, the same thing occurred, though there were different colonizers. But, all in all, it was the same thing. There was disease, invasion of lands, privatization of their culture… Much of this part of Canadian history is also Guatemalan history.

Radio Canada: You read the script of the KAIROS Blanket Exercise in Spanish.  What does it say?

Lilian: The document is about Canada’s real history – Canada has not been around for 150 years, it has been much longer since Indigenous communities have lived here, and they have maintained their daily struggle. Many Indigenous communities are currently losing their culture. Many Indigenous communities lack lands. Many people struggle because a lot has been taken from them, like their lands, as I was saying, but also many youth are searching for their roots and their families. Many of them talk about their histories with residential schools, how much that has affected them – they have written about these issues.

Radio Canada:  Do you think it could be possible to adapt this blanket exercise, which is a learning tool, to the Guatemalan context?

Lilian: Absolutely. As you just said, it is a learning tool that could allow many youth to learn about our history because in Guatemala, as is the case in Canada, few of us really know our history, and it is time that we educate our communities because our historical memory has been lost. What we are seeking right now is to promote our culture, to reconstruct our history so that everyone may know it – so that we may all know the real history, and not the history that others come to tell us.

Radio Canada: During the activities of June 2nd in Ottawa, did you notice participation from Guatemalan and Latin American communities living in Canada?

Lilian: Yes, many of the people who attended the activity on Parliament Hill were Latin American. I was also surprised that there were Guatemalans. It was surprising, but they also say the same thing – that our culture and our history is strongly linked to this one and so they get increasingly involved in promoting our culture and sharing our history.

Radio Canada: Lastly, what has made the biggest impression on you during this tour in Canada?

Lilian: What has made the biggest impression on me is how similar our histories are. Despite being separated by borders and by the weather, which is very different in Guatemala, it is not the weather or where one is located that matters. It is the history that we have endured and that we are now getting our communities to learn about. I like that – I didn’t know that there were Indigenous communities in Canada. And now that I´m here I realize that they are in a similar situation to Indigenous communities in Guatemala.

Radio Canada:  Lilian Marleny Bolvito Gonzalez, Guatemalan youth who participated in the Blanket Exercise on Parliament Hill in Ottawa – Thank you for this interview.

Lilian Marleny Bolvito Gonzalez is Mayan Achi from the village of Chuategua Rabinal Baja in Verapaz, Guatemala. She works for the local organization, Qachuu Aloom, as part of an agro-ecology team, providing training and accompaniment to the community in the production of native crops and seeds. She is currently pursuing a degree in Agricultural Engineering at the Rural University of Rabinal.