Will Obama’s Climate Speech be a Game Changer? On a blistering hot June day in Washington, President Obama delivered a major speech on climate change. Many interpret the event as his attempt to establish a legacy as a progressive leader deeply committed to leaving future generations “a cleaner, safer and more stable world.”[1] Whether this initiative will actually represent an historical turning point will very much depend on the actions that follow his soaring rhetoric.

Although the president devoted only one short paragraph to the Keystone XL pipeline in his eight page speech, the decision he will eventually make on whether to approve the tar sands pipeline will be a key test of whether he is serious about combating climate change.

Halfway through his 45 minute speech Obama declared “…our national interest will be served only if this [Keystone XL] project does not significantly exacerbate the problem of carbon pollution. The net effect of the pipeline’s impact on our climate will be absolutely critical to determining whether this project is allowed to go forward.”

Based on the evidence, it is clear that extracting oil from bitumen does significantly exacerbate greenhouse gas (GHG) emissions. The extraction and upgrading of bitumen into synthetic fuel emits 3.2 to 4.5 times more GHGs than the production of conventional North American crude. Author Andrew Nikiforuk reports that “Oil transported to the United States by the Keystone XL pipeline … could over a 50-year period increase carbon emissions by as much as 935 million metric tons relative to other crudes.”[2] Moreover, at a capacity of 850,000 barrels per day, the large volume of oil that would be carried by the Keystone XL pipeline is clearly an incentive for oil companies to expand their tar sands operations. This is especially the case when other options, such as the Northern Gateway pipeline and the reversal of Enbridge’s line 9 to take crude east from Sarnia to Montreal, face strong opposition from many sectors of civil society particularly Indigenous peoples and ecologists.

However, there are four reasons why President Obama might still approve a permit for the Keystone XL:

First, we should not underestimate the strength and political clout of the oil industry. We can expect them to emphasize the national security and job creation potential of the pipeline. After all, it was the promise of jobs that led President Obama to downplay the environmental dangers of hydraulic fracturing (fracking) of shale formations to recover oil and natural gas. In his speech the president continues to promote natural gas despite evidence that methane, a GHG 25 times more potent than CO2, escaping from shale gas extraction sites makes the climate warming footprint of shale gas larger than that from burning coal over a 20-year time period.[3] Instead of calling for a moratorium on shale gas, the president calls on the industry to make shale gas extraction “safer and cleaner, to make sure that we’re not seeing methane emissions.” Will he also give the industry the benefit of the doubt that extraction of oil from the tar sands can be made “safer and cleaner”?

Secondly, a lot will depend on the final Environmental Impact Statement that the U.S. State Department will prepare for the president. Will a final report issued under Secretary John Kerry repeat the claim of the interim report issued under Secretary Hillary Clinton that said building the pipeline would result in “no substantial change in global greenhouse gas emissions… [since it is] unlikely to have a significant impact on the rate of development” of the tar sands? Or will the department finally listen to the opinion of the U.S. Environmental Protection Agency (EPA)? The EPA had previously told the State Department “We estimate that GHG emissions from the Canadian oil sands crude would be approximately 82 per cent greater than the average crude refined in the U.S. on a well-to-tank (where the tank represents a vehicle’s gas tank) basis.”[4]

Thirdly, will TransCanada Pipe Lines (TCPL), the sponsor of Keystone XL, quietly threaten to sue the United States under terms of the investor –state provisions of the North American Free Trade Agreement? TCPL could demand compensation for the $1.8 billion it has already spent on engineering costs and stockpiles of equipment and pipe if a permit is denied.

Fourthly, might a gesture from the governments of Canada or Alberta indicating an intention to reduce GHG emissions from the tar sands through deployment of new technologies or carbon capture and storage be enough to allow Obama to say that the net effect of burning tar sands oil will be reduced?

President Obama’s decision is not expected until later this year or perhaps not until 2014. In the meantime opponents of the Keystone XL project have pledged to keep up the pressure on the president to refuse a permit.

Recognizing that he cannot overcome opposition from Republican members of Congress to measures such as putting a price on carbon emissions, the president has chosen to do what he can using his executive powers. With this limitation in mind, there are several commendable aspects to Obama’s program. For example:

Yet, given the urgency of fighting climate change, Obama’s program is far from adequate.

While it is possible that the United States will meet its goal of reducing emissions to 17% below their 2005 levels by the 2020, this target is far from sufficient. If we are to have any hope of keeping the increase in global temperatures under two degrees Celsius, then industrialized countries must reduce emissions by 25% to 40% below their 1990 levels by 2020.

While President Obama spoke about redoubling efforts to reach a new global agreement to reduce GHG emissions, US negotiators at recent UN climate talks in Bonn displayed a distinct lack of urgency or ambition. Pablo Solon, Director of Focus on the Global South and former chief climate negotiator for Bolivia, reports that at Bonn, the U.S. stuck to its same policy of only calling for voluntary emission reduction pledges without taking any new initiatives.[6] The U.S. goal of reducing emission by 17% from 2005 levels by 2020 amounts to a decrease of only 3% below 1990 levels. If the U.S. and other countries only meet their current pledges, then the world is on track for temperature increases of more than four degrees above pre-industrial levels.

A new World Bank report, Turn Down the Heat: Climate Extremes, Regional Impacts and the Case for Resilience, documents how scientists assert that two degrees of warming above pre-industrial levels could occur within just 20 to 30 years causing widespread food shortages and unprecedented heat waves. The report says “strong and decisive action must be taken to avoid a 40 C world – one that is unmanageable and laden with unprecedented heat waves and increased human suffering … [rendering it] impossible to lift the poorest on the planet out of poverty.”[7] The report shows particularly devastating consequences for Sub-Saharan Africa, South East Asia and South Asia.

Yet Obama makes no commitment to new public finance for developing countries to fight climate change through mitigation and adaptation measures. He only refers to past commitments for “billions of dollars in private capital for clean energy projects around the world.” His pledge to “end public financing for new coal plants overseas” is qualified by two caveats. He implies that coal-fired plants could go forward if they are equipped with carbon capture and storage technologies. But these are not likely to be affordable or viable in most instances.[8] He also endorses a proposed World Bank policy that would allow financing for coal plants where the Bank does not believe there are feasible alternatives – a loophole that is currently being challenged by civil society critics of World Bank lending for a coal project in Kosovo.

If President Obama is serious about reasserting U.S. leadership, he will have to fulfill his promise to intensify efforts to reach out to major emitters such as China and India. His recent agreement with President Xi Jinping of China to work through the Montreal Protocol to phase out the use of hydrofluorocarbons (HFCs), a very potent GHG, is a positive step. More bilateral and plurilateral efforts will be needed as we cannot afford to wait for the UN Framework Convention on Climate Change process to reach an agreement by 2015 that would only take effect in 2020. But 2020 may be too late. As the International Energy Agency has made clear, temperature rises above two degrees can only be prevented if vigorous actions to reduce emissions take place sooner than the end of this decade.

Since the Canadian government has pledged to follow the U.S. lead on climate policy, Canadians will expect our government to emulate the positive elements of President Obama’s program. Vehicle fuel economy requirements are already being harmonized. But it remains to be seen how Canadian policies on emissions from coal-fired power plants will compare with the standards that ultimately emerge from the EPA’s consultations with industry. The restrictions on emissions from coal-fired power plants announced by Environment Minister Peter Kent in September of 2012 were much weaker than the draft regulations released a year earlier.[9]

A huge difference between Canada and the United States is that the U.S. is on track to meet its target to reduce emissions to 17% below their 2005 level by 2020 while Canada is far behind in efforts to meet that same target. When Scott Vaughan, commissioner of the environment in the Auditor-General’s office, crunched the numbers in 2012, he found that far from being on track to reduce emissions by 17%, Canada was headed for emissions that would be 7.5% above their 2005 levels in 2020. [10] Little has happened since then to change the picture.

The biggest omission from President Obama’s speech, and the biggest flaw in Canadian policy, is a failure to recognize that in order to keep global temperature increases below two degrees most of the fossil fuels discovered to date cannot be burned. Without this recognition no policy speech will truly constitute a game changer. The International Energy Agency calculates that two-thirds of known fossil fuels reserves have to remain in the ground if we are to have a 50% chance of keeping the temperature rise below two degrees.[11]

A key test as to whether President Obama is indeed committed to fighting climate change will be his final decision on the Keystone XL pipeline. A decision to allow the project to proceed would implicitly okay further production of tar sands oil with its outsized carbon footprint.

[6] Pablo Solon, Everyone must accept binding climate commitments. May 2, 2013 at  http://www.rtcc.org/pablo-solon-everyone-must-accept-binding-climate-commitments/

[7] The World Bank. Turn Down the Heat: Climate Extremes, Regional Impacts and the Case for resilience. Washington: The World Ban. Executive Summary. Page 11.

[8] See John Dillon. “The Costs and Risks of Carbon Capture and Storage.” KAIROS Briefing Paper No. 21, November 2009. At http://www.kairoscanada.org/wp-content/uploads/2011/09/PBP21-CarbonCaptureandStorage1.pdf 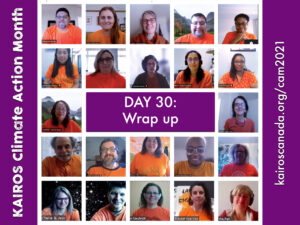 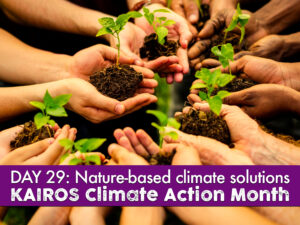 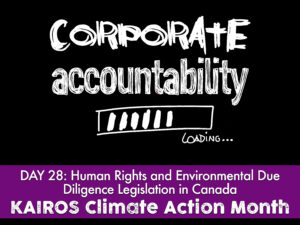 Human Rights and Environmental Due Diligence Legislation in Canada #KAIROSClimateAction 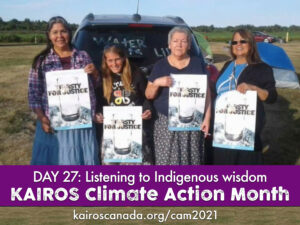