RCMP to use KAIROS Blanket Exercise in all cadet training 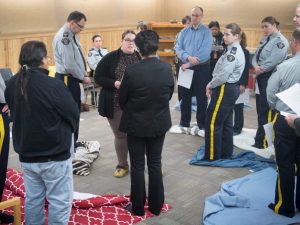 RCMP instructors receive training in the KAIROS Blanket Exercise at the RCMP Academy in Regina. Photo by RCMP Academy, 2017.

Written by Tali Folkins. Originally published in the Anglican Journal on December 12, 2017.

Starting this December, the training of all RCMP cadets in Canada will feature the Blanket Exercise, a teaching tool in Indigenous history developed by ecumenical social justice group KAIROS Canada, the RCMP announced earlier this month.

The RCMP said it had decided to bring the exercise into the training program used at its academy in Regina “in the spirit of encouraging reconciliation with Indigenous peoples.” The exercise will be used as part of the academy’s training module on missing persons, and will be led, the RCMP said, by instructors at the academy, overseen by a “knowledge keeper,” an Indigenous elder from Saskatchewan.

“We’re always looking for new and innovative ways to deliver material that we have in our program, and then we sometimes add and change to the material that exists,” Nathalie Fehr, curriculum designer at the academy, said in an interview with the Anglican Journal. “We felt that the Blanket Exercise would be a great experiential exercise, giving the cadets some Indigenous history while understanding how it impacts the communities we serve.”

Staff at the RCMP academy first learned about the exercise through news coverage of it, Fehr said. She participated in the exercise herself and, impressed, proposed it to the academy, which accepted the idea.

The hands-on nature of the exercise, which has participants stand on blankets representing their land and then walk through various developments in Canadian Indigenous history, as blankets are progressively removed, makes it different from how Indigenous history has previously been taught at the academy, she said.

“Previously in the program, we had historical facts that were sitting in a PowerPoint presentation,” she said. “This is an experience, and it’s a way of learning and to retain some of the material that we had presented in a different way in the past.”

Cadets who graduate from the training they receive at the academy are normally hired into the RCMP. The police force hopes that officers trained with the Blanket Exercise will be better prepared to deal with situations involving Indigenous people and communities because they have a deeper understanding of how they have been shaped by their history, Fehr said.

“We think this is a huge step forward…for KAIROS, but also for the RCMP and, I think it’s ultimately part of the broader steps that the country needs to take towards right relations with Indigenous people,” she said.

KAIROS, Henry said, has come to learn that the exercise has the potential to both build empathy for Indigenous people and to stimulate curiosity about their experiences.

“We have the experience that it actually opens people to try to do more, to read more, to be more aware, to be more engaged, to seek more knowledge,” she says. “For RCMP, this is critically important because they’re in front-line relationships with Indigenous peoples and Indigenous communities, and both the issue of empathy and the issue of the commitment to future learning are key to trying to build respectful relationships.”

“There’s a lot of who we’ve been as Canada that has created deep wounds in Indigenous communities,” she said. “We’re talking about a process of healing and justice, and the RCMP, as a Canadian institution, needs to be part of that process. This is one way that they’re signalling their commitment.”

Asked whether she believed it was important for the RCMP in particular to be building this kind of empathy for and knowledge of Indigenous Canadian history, Henry said, “I think all of Canadian society has to be on this road. I would say that, yes, there are certain institutions of the country that have power, and they can exercise that power over people in communities. The RCMP has that kind of power to exercise and they can do that in a way that is respectful and appropriate. Obviously, there is a history of times when that’s not been the case…”

On December 4, KAIROS staff went through the exercise with instructors from the RCMP academy. The first use of the Blanket Exercise with new cadets was on December 5.

KAIROS Canada has 10 member groups, according to its website, including the Anglican Church of Canada and the Primate’s World Relief and Development Fund.