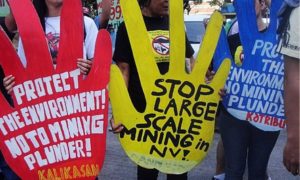 (Toronto, ON) – KAIROS Canada presents MERE Hub on November 27 at Ryerson University (Architecture Building – 325 Church Street) between 5:30 and 7:30 p.m. The panel event, featuring Indigenous women land defenders from Guatemala and Colombia, will officially launch Mother Earth and Resource Extraction, or MERE Hub, an online platform that connects and helps further empower Indigenous women land and water defenders in Canada and worldwide and was developed in consultation with women at the forefront of environmental protection.

KAIROS is launching the MERE Hub during the 16 Days of Activism against Gender-Based Violence campaign, which begins November 25, the International Day for the Elimination of Violence Against Women, and ends on December 10, International Human Rights Day.

KAIROS is a social justice organization that includes ten Canadian churches and religious organizations. We are Indigenous, settlers and newcomers in Canada working with people of faith or conscience all over the world for ecological justice and human rights. We deliberate on issues of common concern, advocate for social change and join with people of faith and goodwill in action for social transformation. Learn more: www.kairoscanada.org.