KAIROS statement into the inquiry on missing and murdered Indigenous women 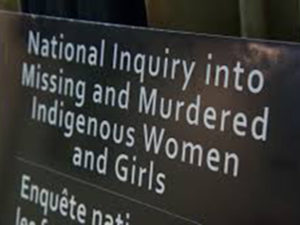 The Government of Canada officially launched the long-awaited National Inquiry into Missing and Murdered Indigenous Women and Girls on August 3, 2016 “to identify and examine the systemic causes of violence against Indigenous women and girls.” KAIROS Executive Director Jennifer Henry’s statement praises the courage of the families and stresses that the inquiry’s success is a collective responsibility.

It is our collective responsibility

(August 4, 2016) Less than a year after receiving the Truth and Reconciliation Commission (TRC) of Canada’s Final Report, which examined the Indian Residential Schools System and its intergenerational impact on Indigenous peoples in Canada, the Government of Canada officially launched a National Inquiry into Missing and Murdered Indigenous Women and Girls on August 3 “to identify and examine the systemic causes of violence against Indigenous women and girls.”

KAIROS acknowledges and commends the courage and perseverance of the families and their allies who worked so hard and for so long to make this inquiry a reality.

KAIROS is pleased the Government of Canada has honoured its pledge to hold a national inquiry into missing and murdered Indigenous women and girls. It is notable that the development of an inquiry was included in the mandates of Indigenous Affairs Minister Carolyn Bennett, Justice Minister Jody Wilson-Raybould, and Status of Women Minister Patti Hajdu.

The Government of Canada has also promised to implement all 94 of the TRC’s Calls to Action, and the August 3 announcement responds to Call to Action 41 which calls for an inquiry into the “causes of, and remedies for, the disproportionate victimization of Aboriginal women and girls.” The TRC suggested the inquiry’s mandate should link to “the intergenerational legacy of residential schools.”

During the launch there was much talk about the inquiry’s Terms of Reference (TOR). Two weeks ago, on July 20, KAIROS signed a joint statement expressing concern that the draft TOR was “insufficient and inadequate to ensure a robust and effective inquiry into the systemic causes of violence against Indigenous women and girls in Canada.”

At the launch, the Government of Canada responded with assurances that the concerns had been addressed, or would be. While we have little choice but to have faith that this will be the case, it will require us to be vigilant, and to hold the government accountable.

KAIROS is honoured to be identified by the Native Women’s Association of Canada (NWAC) as a key ally, along with Amnesty International. Referring to its early research into missing and murdered women and girls, NWAC said: “But in the beginning there were only a few allies that listened and believed us. Our friends at Amnesty International and KAIROS: Canadian Ecumenical Justice Initiatives were key in helping to expose the story of what is happening to Indigenous women and girls in Canada.”

Not long after its creation in 2001, KAIROS received a request for support from NWAC for an initiative focused on violence against women, and the issue of missing and murdered Indigenous women. It was one of the first Indigenous rights initiatives adopted by KAIROS, and it marked the beginning of an important partnership. Many of our member churches and organizations have been directly involved in providing support and engaging in acts of advocacy in support of this initiative.  It has been an ongoing relationship- and community-building journey.

Together with our churches, with NWAC, and with other Indigenous and non-Indigenous organizations we have learned and un-learned, opening our hearts and our minds to the realities of missing and murdered Indigenous women and girls. Together, we continue to challenge the attitudes and behaviours – the ignorance – that fuels the racism and intolerance that feeds violence.

It is also our responsibility to ensure that this inquiry makes a difference and does not become “just another report” that ends up on the shelf, its recommendations ignored. This will include providing support to the commissioners as they investigate the root causes of violence against Indigenous women and girls and uncover one more dimension of the truth required for genuine reconciliation in Canada.

By working collaboratively, we can meet these responsibilities.

KAIROS will proudly continue working with Indigenous peoples and organizations and their allies to ensure the inquiry succeeds. We continue to hold the families and communities in our hearts and prayers, and remember and honour the women and girls who have been denied true justice.

In July 2016, KAIROS signed the Statement on Terms of Reference for the National Inquiry into Missing and Murdered Indigenous Women and Girls in Canada