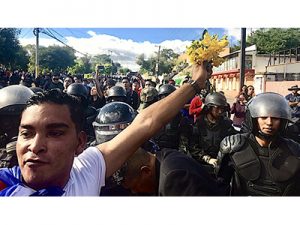 KAIROS is gravely concerned about the political and human rights crisis currently unfolding in Honduras following the presidential elections on November 26.

Hondurans who went to the polls peacefully and in good faith were met with illegal interference from President Juan Hernandez and the Supreme Electoral Tribunal, which is closely aligned with the incumbent party. Both the Organization of American States and European Union Electoral Observation Missions have reported voting irregularities, errors and systemic problems in the electoral process. Tens of thousands of Hondurans have taken to the streets in protest and to demand democracy. The government has responded with a state of siege and a massive crackdown. KAIROS expresses its solidarity with the Honduran people and salutes all those who peacefully exercised their vote and are currently demanding that the will of the electorate be respected.

KAIROS is a member of the Americas Policy Group (APG) of the Canadian Council for International Cooperation. The APG wrote a letter to Minister Freeland on December 2 calling for the Canadian government to support democracy in Honduras by:

The full text of the letter can be found here http://bit.ly/2D6micl

In the face of the Organization of American States’ recent public conclusion that the November 26 elections were not clean and its call for new elections, it is important to reiterate this call to the Canadian government.

Co- Development Canada, another member of the APG, has this online action that allows you to send a message to Foreign Minister Chrystia Freeland (with copies to the opposition Foreign Affairs critics ) urging Canada to suspend political and economic support to the Honduran government until truly free and fair results are declared and the government of Honduras can demonstrate that the constitutional and human rights of its people are being respected.