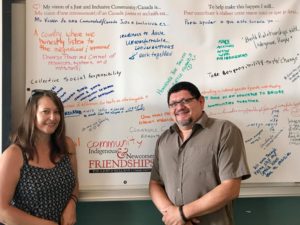 Guests of the Festival of Faith were invited to participate in a workshop presented by Alfredo Barahona and Dawn Maracle that shared experiences with the KAIROS Blanket Exercise and the KAIROS project, Indigenous and Newcomer Friendships for a Just and Inclusive Community. While commissioners were beginning to gather for the first business of the 43rd General Council, these guests participated in personal and honest dialogue about colonization, reconciliation, and friendship-building.

Barahona and Maracle educated members from the wider church about the limitations that colonial structures present to Indigenous peoples of any area of the world. These individuals, at different places in their journey to ally-ship, found that the intimate workshop provided a safe-space to discuss local and wider concerns for relations with Indigenous peoples.

Ultimately, global citizens will have to come together with an open, respectful frame of mind to begin to develop an anti-colonial framework of cooperation, common good, and collectivity.

“This is the time in history we’re meant to come together,” says Maracle. “We have to learn about each other, and we have to do it before it’s too late.”

As the proposed regions will be decided at this General Council, a workshop on Indigenous and newcomers friendship opens the door to deepening the communication and friendships between neighbouring communities.