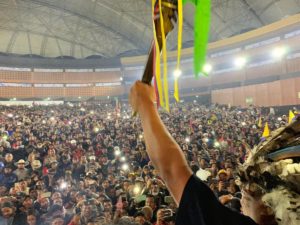 After almost two weeks of mass mobilizations, the people and Government of Ecuador reached a deal late Sunday night. In a dialogue aired live on national television and online, the President of Ecuador agreed to cancel Decree 883, the austerity package that catalyzed a wave of national actions at the start of the month; in turn, Indigenous leaders, who agreed to the dialogue on the condition that it be televised, vowed that protests would also come to an end. The talks were brokered by the United Nations and the Catholic Church.

According to the Defensoría del Pueblo, the office of the people’s ombudsperson, seven people died, 1,340 were hurt, and 1,152 were arrested in ten days of protests. The majority of those killed, hurt, and arrested identify as Indigenous.

Indigenous leaders and the Government of Ecuador also agreed to work together on an economic policy to address the country’s mounting debt.