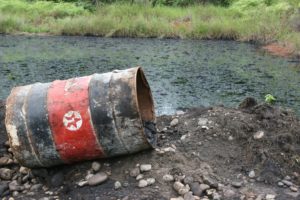 “With the rise in fuel prices – and travel fares – the government forgives the environmental crimes of the true pollutants and puts the responsibility of climate change on the people.”

Acción Ecológica, KAIROS partner organization in Ecuador, has released a statement denouncing the Government of Ecuador’s reform package and the violence of police forces towards demonstrators who have been protesting the measures that eliminate national fuel subsidies.

According to Acción Ecológica, the measures, which went into effect at the start of the month, place an undue burden on the people of Ecuador while corporate subsidies remain intact. Rather than tax corporations, especially those in the extractive sectors, and hold them accountable for the harm they arguably inflict on Indigenous communities, farmers, and the environment, the Government of Ecuador has opted to have the people pay for Ecuador’s deficits. The reform package imposes austerity measures in Ecuador in exchange for IMF loans meant to tackle the country’s mounting debt.

Acción Ecológica affirms that the Government of Ecuador must instead require that corporations pay the ecological debt they owe the country for environmental and human rights violations, such as the $9 billion U.S. dollars Chevron Texaco owes the people of Ecuador.

“We greet and thank Indigenous movements for their presence in the streets. Their struggles are and have been the defense of water, forests, seeds, nature. We are proud of those roots that cement our culture and our country.”

Read the statement in full, in its Spanish and English versions, below.

IN THE FACE OF MEASURES TAKEN BY ECUADOR’S FEDERAL GOVERNMENT

Once again, the logics of exploitation and concentration of wealth, in force in our country, fall on the population, territories, and nature.

In response to IMF pressure and using a justification apparently pro-environment, the government is eliminating fuel subsidies while official policies promote the expansion of oil, mining, and agribusiness frontiers, which are business activities with serious climate change implications; what is more, these businesses are beneficiaries of perverse subsidies disguised to support the industry and guarantee the impunity of companies.

What else can all these actions be but subsidies to companies: the easing of environmental regulations for their operations, such as permits to deforest, to use agrochemicals on a recurring basis even through aerial spraying, use of huge amounts of fresh water for industrial processing, and conversion of estuaries and rivers in toxic waste dumps? The burning of gas through burners in petroleum areas for 25 years alone equals 5 million dollars.

The construction of roads with public money or the deployment of police or military forces to provide security and protection for conflicts against affected populations subsidies constitute subsidies, do they not?

Although the package of measures taken is presented as necessary to address the deficit of fiscal funds, mining companies maintain enormous privileges, such as, income tax exemption for 10 to 15 years from the time they start generating profits, a VAT refund, exoneration of tax for overseas remittances, tax exemption for extraordinary gains, the freedom to operate from tax havens, among others.

For its part, the palm oil industry benefits from preferential credits, a value-added tax of zero for machinery and spare part exempts payment of income tax for new investments in border areas, and palm oil exporters are exempt from paying exit taxes.

Dams and hydroelectric plants enjoy the subsidy of water, which causes conflicts with communities that suffer the violation of their right to water, for consumption and food sovereignty. Based on this privileged position, the construction of about 200 hydroelectric plants is planned.

One of the measures proposes lowering and simplifying the single banana tax by arguing that doing so will energize the sector and generate employment. It is overlooked that this activity is based on precarious labor and that its production model is dependent on toxic inputs and the importation of agricultural machinery. In general, agricultural business expands while the sustainable agri-food systems that feed 60% of the Ecuadorian population are marginalized, putting the country’s food sovereignty at serious risk.

This whole model is based on great debt, anticipated sale of oil, and mining royalties. For example, the debt acquired from China to advance oil projects in the Yasuni, or that from international financial

institutions that includes funds to guarantee the payment of external debt and arbitration awards. These debts are paid with the expansion of the oil and mining sectors in mind, and with adjustment measures such as those taken recently.

These are the subsidies that must be eliminated because they deepen extractivism and agribusiness, which result in more damage to the territories of Indigenous peoples and farmers and violation of human and environmental rights.

In no country where fossil fuel subsidies have been eliminated, have fuel consumption and emission rates seen a reduction; no figure shows that such economic, fiscal or similar measures have stopped climate change. On the contrary, the impunity of oil companies and other high energy consumers, such as agribusiness and mining, has been guaranteed. Why not raise taxes on oil and mining companies instead?

Why not require Chevron Texaco to pay its social and ecological debt, estimated at more than 9 billion dollars?

With the rise in fuel prices – and travel fares – the government forgives the environmental crimes of the true pollutants and puts the responsibility of climate change on the people.

The violence that has been inflicted in these last few days to “appease” the legitimate reaction of the people facing the forceful imposition of these measures reflects the violence that is lived in territories where extractive and agricultural projects are imposed.

We demand an end to the repression and violence that public forces are directing towards legitimate expressions of protest and demand the repeal of the exemption decree.

We call on the international community and human rights protection agencies of the UN to designate a high-level commission to verify what is happening in our country, and to stop the violence that the government is promoting in order to impulse the neoliberal package.

We demand that the measures behind the expansion of the mining, oil, and agribusiness frontiers be stopped.

We greet and thank Indigenous movements for their presence in the streets. Their struggles are and have been the defense of water, forests, seeds, nature. We are proud of those roots that cement our culture and our country.