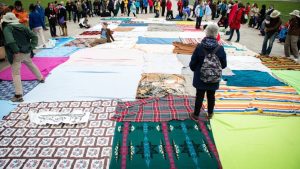 Photo: In the blanket exercise, blankets represent land belonging to Indigenous people prior to contact. As the game goes on, the blankets become smaller, with large distances between them.

Churches played a major role in residential schools, and now many religious organizations are working hard at mending their relationship with Indigenous communities.

Leading the way in this is KAIROS, a Christian faith-based organization that brings together various churches to educate Canadians on the history and legacy of residential schools.

KAIROS has several resources available to Canadians who want to learn more about residential schools, with their most popular resource being the Blanket Exercise.

The premise of the exercise is simple.

Participants stand on the blankets laid out on the floor, and they play the role of Indigenous people before colonization.

They are lead through a story guided by a facilitator and a person playing the role of the European.

“When the European arrives onto the blanket, they immediately start to visit with all the people who were on those blankets, and before long starts to turn back and turn up and folding [the blankets] smaller and smaller,” said Ed Bianchi, Program Manager of KAIROS.

“This represents the dispossession and displacement of land and the impact of government policies, programs and law on Indigenous people and … their connection to the land.”

Bianchi says that through the exercise participants learn empathy for what Indigenous people have gone through.

“We’ve done this exercise with police officers, with corrections officials, with members of the health services community — these are people who deal directly with Indigenous people on a daily basis,” he explained.

“After they’ve done this exercise it gives them the context to understand the people they’re working with.”

For the average Canadian who wants to start reconciling with Indigenous people, KAIROS has a booklet called Strength for Climbing: Steps on the Journey of Reconciliation, which provides simple tips of how to participate in the reconciliation movement.

Some suggestions that Bianchi provides include: reading a book by an Indigenous author, watching a movie directed by an Indigenous person, identifying as a settler, and staying attuned to Indigenous opinions and perspectives.

“Some of them are straightforward and easy to do, while others take a little bit more effort,” said Bianchi.