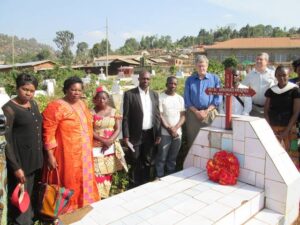 On June 23, 2013, KAIROS delegates to the DRC took part in a ceremonial commemoration of Pascal Kabungulu, the former Secretary General of KAIROS’ partner organization, Héritiers de la Justice. He was murdered in 2005.

On June 23, 2013, KAIROS delegates to the DRC took part in a ceremonial commemoration of Pascal Kabungulu, the former Secretary General of KAIROS’ partner organization, Héritiers de la Justice. He was murdered in 2005.

In response to growing impunity, unrest, and violence in the Democratic Republic of Congo (DRC) and concerns raised by our partner, Héritiers de la Justice and other members of Congolese civil society, KAIROS wrote a letter to the Minister of Foreign Affairs urging the Canadian government to reinforce the international community and civil society in their efforts to bring peace to the DRC with greater justice. Specifically, the letter calls for prosecution against war crimes and access to reparations, reform of the electoral laws and institutions, and support for women’s engagement in peacebuilding.

KAIROS supports the Women, Peace and Security work of Héritiers de la Justice in Sud-Kivu province of eastern DRC, a program jointly funded by Global Affairs Canada. We have witnessed the critical work of civil society in the DRC, particularly grassroots women, in building conditions for just, inclusive, and equitable peace while addressing ongoing impunity in relation to violence and human rights violations.

In particular, the letter calls on the Canadian government to promote active diplomatic and financial support to women in the prosecution of those responsible for gross violations of human rights and crimes against women as well as in decision-making mechanisms at the earliest stages of peacebuilding.

The following blog provides background on the escalating political crisis and violence in the DRC.

A political crisis has been brewing in the Democratic Republic of Congo (DRC) for some time, especially since summer 2020 as the ruling political coalition has fallen apart.  This could lead to violence that, as usual, would playout more prominently in the east of the country, including South Kivu province, where militia and rebel groups are prominent and where the work of KAIROS Women, Peace and Security partner Héritiers de la Justice is situated.

Héritiers de la Justice was a direct victim of violence and the impunity that continues and escalates unabated.   On July 31, 2005 the former Executive Secretary of the ecumenical human rights organization, Pascal Kabungulu, was assassinated in his home in front of his family for his knowledge of illicit mining activities involving the military. For security reasons both Pascal’s family and his succeeding Executive Secretary at Héritiers de la Justice are now political refugees.  There has still been no justice.   Although the legal system in DRC failed to adequately prosecute the perpetrators of this crime years ago, the UN Human Rights Committee has recently taken up the case.  (see DRC violated right to life of prominent human rights defender Pascal Kabungulu, UN Committee )

There are fears that the current political crisis will revive insecurity and further restrict human rights, democratic space and public freedoms for which Héritiers de la Justice and others in Congolese civil society have been fighting for years.  There have been some six million deaths in the DRC in the last two decades due to civil war and unrest, and several thousand, especially in the east of the country, in the last two years under a dysfunctional governing coalition.  This is more than under the last two years of the former Kabila presidency.  In this context, human rights defenders like Héritiers de la Justice and others in social movements run immense risks from amplifying threats of all kinds.

In recent months, there has been a breakdown in relations  between the governing political coalition shared by Cap pour le Changement (CACH) of the President Félix Tshisekedi and the Front Commun pour le Congo (FCC) of his predecessor Joseph Kabila which was an outcome of the fraudulent late 2018 presidential election (see Transparently opaque rigged DR Congo presidential election). The secret power-sharing agreement between Joseph Kabila and Félix Tshisekedi leaned heavily in favor of the former president but has now unraveled.

New tensions started with the appointment of three new senior judges to the Constitutional Court in mid-July by the President of the Republic. The Constitutional Court is a strategic body for certification of the elections of 2023. On December 6th, the current President, Tshisekedi, made public the decisions and conclusions he reached after his broad consultations beginning in early November with key stakeholders and political parties, but excluding FCC which refused to participate.

The lower house of the Congolese parliament, the National Assembly, overwhelmingly represented by FCC, voted by a majority to impeach the speaker who was a close FCC Kabila ally. This led to a standoff between Tshisekedi and Kabila camps that largely blocked all institutions.

In response there were clashes between activists from two political camps, especially in Kinshasa around and inside the People’s Palace as well as speeches and other statements by proponents of these two political platforms. This crisis has been marked by the breakdown and rupture of the FCC-CACH governing coalition and the emergence of a ruling parliamentary majority sympathetic to President Tshisekedi.

In addition, national and provincial political and security institutions are still fragile after decades of war, corruption, and democratic deficit. The political class still adheres to party leaders’ personality cults. Several international and local reports point to a significant number of political actors who have links with armed groups and militias still active mainly in the eastern provinces of the country:  Ituri, North Kivu, South Kivu, Tanganyika, and Kasai.

There is an urgent need to support Congolese civil society, including Héritiers de la Justice, and communities in South Kivu.  There is also a need for advocacy with the national authorities to preserve the peace, resolve disputes through peaceful, legal means and to address the deteriorating security situation, human rights violations and other violence which disproportionally affects women and girls.  Such unrest stemming from the political crisis and the resulting violence and extremism may result in an exacerbation of the impacts of the pandemic.

Prosecuting past war crimes in the DRC would be a deterrent to ongoing violence as recently advocated by Dr. Denis Mukwege, the South Kivu-based 2018 Nobel Peace laureate and close ally of Héritiers de la Justice. This requires the establishment of an international criminal tribunal or court with the powers to try and judge the countless crimes committed in the DRC and allow victims access to reparations, a recommendation that is highlighted in KAIROS’ letter to the Minister of Foreign Affairs.

Evidence of crimes committed during the First and Second Congo Wars from 1993 through 2003 established the foundational United Nations Mapping Report. Similar crimes continue to this day. Militias, rebels, and undisciplined segments of the Congolese army continue to operate with impunity, especially in the east of the country, often in relation to resource extraction.

The fact that the Congolese government has not been able to address these crimes adequately and that impunity prevails compels a response from Canada and the international community.