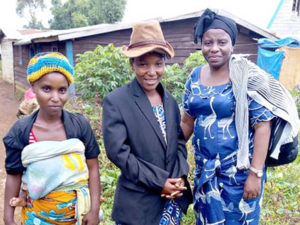 Mr. Gahanzi Birhanenwa and his wife died and left two daughters, Ombeni and Bora Birhanenwa. After the death of their father, the paternal uncles of these two orphaned daughters seized the property left by the deceased without giving anything to the two young women.  The inheritance ceremonies were  to have proceeded this on the grounds that the deceased had no boy.

The two women came to Héritiers de la Justice with the intention of restoring their rights. Six sessions of mediation were held with the deceased’s siblings, who, as a result of traditions, did not believe that a girl could inherit from her father.

With the accompaniment of the facilitators from the KAIROS-supported Women, Peace and Security project at Héritiers de la Justice, on May 20, 2019, in Ciriri, Bagira commune in Bukavu, the eldest daughter of the deceased became the property inheritor. To the two daughters the paternal family handed over the property belonging to their deceased father, a  parcel of land on which two houses were subsequently built.