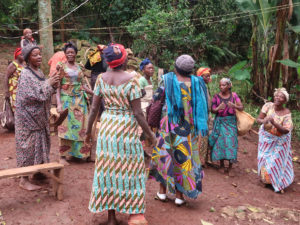 the end of the work day: women from collective singing and dancing

the end of the work day: women from collective singing and dancing

A small collective of women is in the process of cultivating new hillside fields and planting sorghum and sweet potatoes for harvesting in June in Nayatende, South Kivu province in eastern Democratic Republic of Congo (DRC).  They have plans to add beans, taro and corn for the next planting season.

Most of these women have been estranged from their extended families and communities after experiencing sexual gender-based violence.

Until now, the main livelihood for these women has been carrying heavy rocks up steep hills from a hillside quarry for construction. They hope this grueling work will be replaced with income from food crop production and pig raising. These women have pooled their funds, rented part of a hillside for cultivation, purchased pigs and built shelters for them at their homes.

This collective is assisted by KAIROS’ partner Héritiers de la Justice (Heirs of Justice) with whom many of these women have had a relationship for 16 years. Héritiers de la Justice is a partner in the Women of Courage: Women, Peace and Security (WPS) program. KAIROS is supporting this collective as a pilot initiative, complementing the WPS program.

Sexual violence against women is used increasingly as a weapon of war by armed groups in conflict zones in eastern DRC, particularly in South Kivu province. These acts of violence have significant consequences on the entire lives of the victims – physically, psycho-emotionally and economically. Some victims of sexual violence hide the truth from their families for fear of being hunted down or being stigmatized in the community.

This income-generating project will assist some of the women in Nyantende, most of whom have been estranged from their communities, to re-stablish themselves with livelihoods to support themselves and their children economically in a collective with kindred women.

This pilot effort contributes to the women’s self-confidence, self-reliance and realization of their own rights by providing opportunities to meet the basic sustenance needs of their families. It is expected that most of the women will gradually achieve economic autonomy.

While I was there in Nyantende in late January, my Héritiers de la Justice colleagues, Chantal Bilulu and Néné Lubala Neema engaged daily in on-the-ground WPS programming.  At the same time, we tried to visit as many of the dispersed modest hillside homes of the collective participants as possible to see their pigs, some of whom had been given names. One was named Bololoke signifying, in Shi language of the Bashi people, “help in my future.”