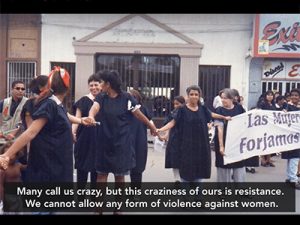 This year KAIROS is celebrating International Women’s Day (March 8) with the launch of a video on Isabel Caicedo  Polanco and the work of KAIROS’ partner, the  Organización Femenina Popular (OFP) in Colombia.

Isabel Caicedo Polanco is a woman of remarkable courage.  She is a devoted daughter, mother, partner, community activist and human rights defender.  She describes herself as an example of her community in Barrancabermeja, Colombia and of her organization, the Organización Femenina Popular (OFP), a KAIROS partner. Like so many women from marginalized communities in Colombia, Isabel is herself a victim of Colombia’s 50 year armed conflict. She lives in the region of Magdalena  Medio which is rich in natural  resources, especially oil and gold, but also extremely poor with a poverty rate that is nearly double the national average. This region was a focal point in Colombia’s armed conflict and human rights tragedy.

Isabel was displaced twice by the armed conflict, once after a horrific massacre in her neighbourhood and once because of her work as a human rights defender. Upon her return to Barrancabermeja, she received psycho-social and legal accompaniment from the OFP and participated in its educational programs and training. As a result, she is now herself a human rights defender and works with the OFP, supporting and training other women.

Isabel was in Canada in November 2016, during the 16 Days of Activism Against Gender-Based Violence campaign, and participated in KAIROS’ NO MAS! –End Violence Against Women NOW tour.  She met with diverse groups including churches, Indigenous groups, women’s organization students, Latin American diaspora and solidarity groups and other social movements.  In Ottawa, she met with members of the Parliamentary Standing Committee on Foreign Affairs and International Development and Global Affairs Canada officials. Her message focused on violence against women, the impacts of the armed conflict in Colombia, the hopes and the challenges of the current peace process, and the work of the OFP.

The OFP has 45 years experience working with marginalized women, advocating for human rights and building conditions for peace amidst the conflict in Colombia. In Canada, Isabel appealed to the Canadian government to accompany the Colombian peace process during this critical time and to support women’s rights organizations like the OFP in the implementation of this peace process.  She presented a vision of peace from the perspective and work of women in Colombia and the OFP.

Isabel is an example of how the OFP empowers women who are victims and survivors of war to become human rights defenders and advocates. In turn, the OFP is an example of the tenacity, creativity and effectiveness of local women’s rights organizations and of their critical role in implementing the current peace accord in Colombia.

This video showcases one of KAIROS’ Women of Courage partners that is working to build equitable, sustainable and just peace – with a feminist face. Learn more about Women of Courage.

Your donation to KAIROS makes this work possible.

Originally published on rabble.ca on March 8, 2017.