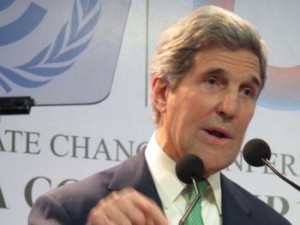 The European Union and the United States are engaged in an unusual public dispute concerning whether agreements reached at the Paris climate conference will be legally binding. U.S. Secretary of State John Kerry ignited the spat by telling the Financial Times that any agreement reached in Paris was “definitely not going to be a treaty.”

A spokeswoman for the EU’s Commissioner for Climate Action responded that “the Paris agreement must be an internationally binding agreement” whether it is called a protocol or a treaty. France’s Foreign Minister, Laurent Fabius told reporters: “Whether it should be termed as a treaty or an international agreement … the fact is that a certain number of dispositions should have a practical effect and be legally binding.”

The debate on what kind of an agreement would emerge from the Paris conference started as far back as the 2011 Conference of the Parties in Durban where it was agreed that the countries would strive for “a protocol, another legal instrument or an agreed outcome with legal force.”

Behind the wrangling over language is a very real concern. U.S. President Barack Obama would face strong opposition from the Republican-controlled Senate which, according to the U.S. Constitution, must ratify international treaties.

On the other hand most UN member countries and civil society organizations agree that any outcome must be legally binding.

What then might happen in Paris? In a 2013 speech Todd Stern, the U.S Special Envoy on Climate Change, said:

“We will need to be creative and flexible as we think about the legal character of the agreement …. We all agreed in Durban to develop a new legal agreement, but left open the precise ways in which it would be legal. … Insisting that only one way can work, such as an agreement that is internationally legally binding in all respects, could put that prize out of reach.”

Explicit in Stern’s remarks is a suggestion that the Paris agreement be broken up into parts with only some of its provisions deemed legally binding, while others, including national greenhouse gas emission reduction pledges, are left voluntary. The Financial Times reports that negotiations are proceeding along these lines.

There are many precedents for this kind of agreement. For example, the most ambitious goals are often stated only in the preamble to an agreement which is not deemed legally binding.

The experience with the 1997 Kyoto Protocol is instructive. It was deemed a legally binding agreement. But it had no real power to penalize Canada when our government withdrew from the protocol in December 2011. Had Canada remained in the Kyoto pact through 2012 it would have had to make up its shortfall in emission reductions from the first compliance period (2008-2012), plus a 30 per cent additional amount during the five-to-seven years of a second commitment period.

In contrast with most international environmental agreements, international trade agreements like the North American Free Trade Agreement generally have penalty clauses that can be applied in the event of non-compliance. Moreover, most current agreements include investor-state dispute settlement (ISDS) mechanisms whereby corporations can sue governments if their policies are deemed to be unfair or unreasonable.

A large number of investor-state cases have been undertaken by corporations that object to measures designed to protect the environment. A recent example is the suit by U.S.-based Lone Pine resources seeking US$250 million in compensation for the “expropriation” by the Quebec government of its permit to explore for shale gas under the St. Lawrence River. Were Lone Pine to win the case and force a resumption of hydraulic fracturing (fracking) activities, it would pose a further threat to the climate as documented in KAIROS’ Ethical Reflections on Fracking discussion paper.

In an attempt to make sure that no investor-state dispute could undermine the effectiveness of an international climate agreement, Gus Van Harten, a professor at Osgoode Hall Law School, has drafted a clause for insertion into the Paris agreement. It would explicitly require that provisions of the climate agreement must take precedence over any investor-state settlement.

Given the commitment that the Obama administration has made to achieving new international trade agreements like the Trans Pacific Partnership that incorporate ISDS mechanisms, it is unlikely that the U.S. would agree to Van Harten’s proposal. However even if it were not incorporated into an enforceable part of the Paris agreement, such a clause could serve as a point of reference for governments arguing before dispute settlement panels that environmental protection should take precedence over commercial interests.

Whatever the legal status of the final Paris agreement, the real work for Canadian governments to take action on climate change will begin after the conference concludes as described in my previous blog post.