We Do Have Choices There was rain in the morning, but when it came time to fly to Fort Chipewyan the sky was beautifully clear.  It was a chance for me to see directly something of what was highlighted at the last two days during the So Long as the Rivers Flow Conference. The view out the windows of our small plane crystallized the choices facing Canadians.  Out one window, the blues and greens of the Athabasca Delta, a breathtaking, seemingly endless expanse of trees, rivers and lakes, punctuated as we travelled further north with unexpected glimpses of yellow-white sand.  Out the other window, the oil sands projects, work camps, swaths of deforested boreal, plumes of smoke and steam, huge earth moving vehicles, vast black tailings ponds.

In the conversations about the development of the oil sands there can be a kind of fatalism, a sense of restricted choices, even no choices.  Oil sands development has become synonymous with economic prosperity, jobs, and energy security, as if there are no other options. This is despite the findings of an advisory panel set up by former Alberta premier Ed Stelmach that the “production costs of heavy oil from oil sands are among the highest in the world.”  The reason investment in such unconventional fossil fuels continues is due to the governments’ willingness to have the public bear the external costs, even to the point of subsidies.

But there is another fork in this road, one that leads to conservation and cleaner, safer energies.  Six to eight times as many jobs could be created by investing in conservation and renewable energy programs.  Clean Energy Canada’s recently released report outlines how in 20 years “Alberta can green its grid and embrace clean energy” in a manner that cuts air and carbon pollution, improves air quality and kick starts a new industry (http://cleanenergycanada.org/).  The Green Economy Network’s plan provides a blueprint for creating thousands of jobs while also reducing Canada’s GHG emissions.  We have choices.

As I looked out the windows—scenes of beauty and of destruction—I could not help but remember the Deuteronomy text “I set before you life and death, blessings and curses.  Now choose life so that you and your children may live” (30:19).  Given the heat waves, drought, floods, storms, erosions of bio-diversity, and rampant insecurity that will accompany unchecked climate change, the result of our fossil fuel addiction, this kind of stark contrast is not overstated.  Indigenous peoples, ecological activists, humanitarians, human rights advocates and many people of faith and conscience are calling us to another choice—conservation and cleaner, safer energies—with the promise of a more sustainable future.  We have choices—difficult ones, yes —but it’s overtime to start choosing life. 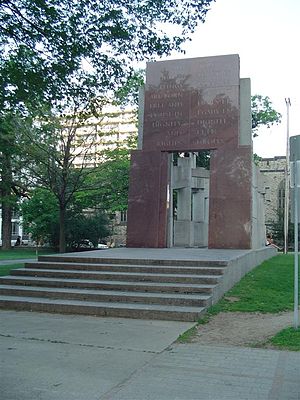