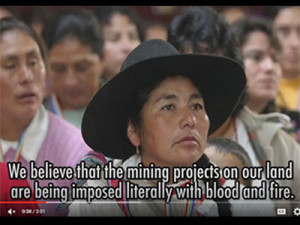 The murder of prominent environmentalist and Indigenous rights defender Berta Caceres has thrown into sharp focus the terrible increase in violence against defenders of the environment in Honduras and worldwide.  According to a recent Global Witness report, killings of environmentalists worldwide has tripled in the last 10 years and Honduras is now the second most dangerous place in the world to defend the environment.

As an Indigenous Lenca woman from Honduras, Berta spoke about her deep connection to the land, the Rio Blanco river, and her work protecting both from the devastating impacts of a hydroelectric mega-project. She described the violence against the land and the river as violence against her people.  In her acceptance speech last year at the prestigious Goldman Environmental awards, she said:   To give our lives for the protection of the rivers is giving our lives for the well-being of humanity and the planet.  It was precisely her work defending the environment against corporate interests that made her a target of violence, exposed her to repeated death threats, and eventually resulted in her assassination. She was killed for her work defending life.

Violence Against the Land, video #3 in the Gendered Impacts series, features Indigenous women explaining the links between violence against land and against women, and how this violence often increases with the arrival of large-scale resource extraction.