The Local and the Global 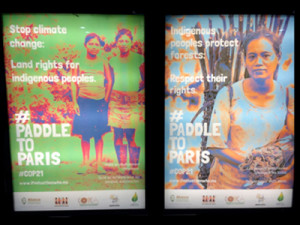 Posters supporting Indigenous rights seen in the subway of Paris.

Posters supporting Indigenous rights seen in the subway of Paris.

Paris is a long way from the places that I call home. Trying to schedule phone calls with my partner and kids back home on Canada’s Pacific Coast, with a 9-hour time difference, has served as a regular reminder of this.

And increasingly, over the past few years, my climate work has felt localized. Systemic, absolutely. Intersectional, sure. But rooted in the places and the people that I call home.

During graduate school, one of my favourite theologians was a Brazilian Catholic nun named Ivone Gebara. An eco-feminist and liberation theologian, Gebara lit fires and connected dots for me. Before this trip I spent a lot of time considering what value my localized climate work had at a global meeting like the COP. Here where we’re talking about:

None of this is familiar language to me. It feels worlds away, not just 9 hours away, from the earth on which I took my first steps. World away from, but related to, our fights at home to block risky pipelines on Indigenous lands, and reduce tanker traffic on pristine coast, and prevent massive investment in infrastructure projects that lock us into the old economy, and make clear that fracking natural gas is not a climate solution.

At a Monday panel on faith-based engagement on the climate crisis, Fazlun Khalid, from the Islamic Foundation for Ecology and Environmental Sciences (IFEES), spoke about how the world’s water supplies are limited and constantly recirculating. And he said for him the poignant realization out of that reality is that you and I have probably drank the same water, swam in the same water, bathed in the same water.

If I am homesick, it is amplified by the depth of love that activists and advocates here have for their own homes, their own earth and soil. It is a reminder of why this, and all of our climate justice work, matters.