Ironically, changes to Employment Insurance Regulations announced earlier by the Government of Canada came into effect on December 10, International Human Rights day. As a result of these changes, migrant workers who pay into the Employment Insurance (EI) system while working in Canada will no longer be eligible to collect parental leave and other special benefits if they do not work in Canada year-round.

While never eligible for full EI benefits due to the seasonal nature of their work, migrant farm workers were able to collect some benefits for up to 35 weeks even if they lived outside of Canada for part of the year. Canadians who pay into EI and are eligible for only a few benefits will know how migrant workers now feel.

Even though the contribution of migrant workers to Canada’s economy is enormous and essential, they are also one of the most vulnerable groups of workers in Canada and this change to the EI system will have a significant, negative impact as many must leave the country as soon as their contract expires. Among other things, it means temporary migrant workers will not be able to collect benefits while caring for loved ones in need.

According to Wayne Hanley, president of KAIROS partner United Food and Commercial Workers (UFCW) Canada, the federal government “is taking advantage of temporary foreign workers simply because it can. Migrant workers have paid hundreds of millions of dollars, like working Canadians, into the EI fund for decades and are now being excluded from receiving core EI parental benefits. It’s like being forced to buy mandatory auto insurance, but you are excluded from coverage.” For more information on the work of UFCW and the Agricultural Workers Alliance (AWA) visit:

This announcement coincides with a week in which the KAIROS network prepares to celebrate the third Sunday of Advent.  We remember that the Holy Family was forced to leave their land and become temporary migrants in Egypt.  As part of her third week of Advent reflection, Miriam Spies, a Master of Divinity student at Emmanuel College, offers these words in reference to John the Baptist:

“He spoke directly to tax collectors: do not collect more than what is fair.  He called for an end to greed, and because of how the empire paid them, an end to the taxpayers’ livelihoods.  John is radically calling people to stop the status quo and choose instead a path of justice and peace.”

KAIROS joins migrant workers, labour and community organizations across the country in calling for the federal government to restore the special benefits of migrant workers. 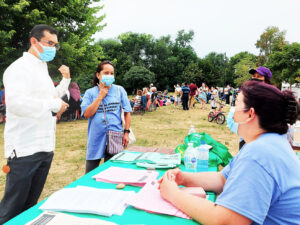 Celebrating migrant workers in Leamington, ON

In loving memory of Francisco Rico-Martinez 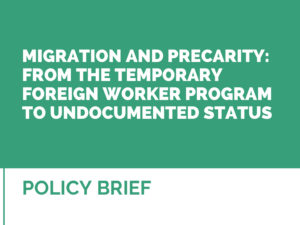 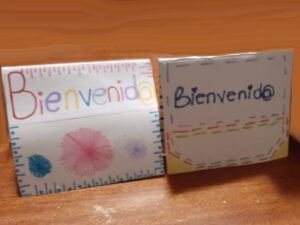