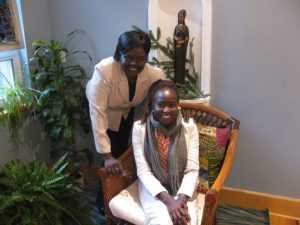 Written by Joelle Kidd. Originally published in the Anglican Journal on December 13, 2017

Two co-ordinators of the National Women’s Program of the South Sudan Council of Churches are asking the Canadian government to help end gender-based violence and support peace in South Sudan through political and financial initiatives.

During a 16-day educational tour of the country sponsored by ecumenical justice organization KAIROS Canada, Agnes Wasuk Petia and Awak Peng met with members of Parliament at a parliamentary breakfast in Ottawa.

The two women, along with KAIROS representatives, urged Canada to increase overseas development assistance from 0.26% of gross national income to the UN target of 0.7%, as well as to deliver on the federal government’s recently announced Feminist International Assistance Policy (FIAP), which earmarks 95% of its foreign aid to women’s rights and equality.

Civil war has been raging in South Sudan since 2013, during which time, according to KAIROS, more than 40,000 Sudanese have been killed and at least a quarter of the population has been displaced, internally or to neighbouring countries.

In a presentation to staff at the Anglican Church of Canada’s national office in Toronto December 11, Petia stressed the great impact that South Sudan’s internal conflict has had on women, who are “the most vulnerable and affected by war,” she said. Studies have shown violence against women and girls in the country to be occurring at twice the global average rate, with sexual violence used as a weapon of war by both government and opposition forces. The United Nations Development Programme estimates that more than half of young South Sudanese women aged 15-24 have experienced some form of physical or sexual violence.

Widespread displacement and discriminatory cultural practices have also deeply affected women in South Sudan. Access to resources and opportunities for education and literacy have been identified by KAIROS as areas of significant gender disparity.

Because of these “cultural issues,” Petia says, it can be difficult for women to know their rights.

“But we are saying now it’s time for us to come out and cry for our rights,” she said, adding that “this can’t happen unless we also equip [women], and give them knowledge.”

During her presentation, Petia shared some of the peacemaking initiatives of the National Women’s Program, including peace marches calling for an end to sexual and domestic violence and urging that girls be granted the right to education. The program also involves grassroots workshops with training for women on peacemaking and “claiming their rights.” Prayer events and dialogues have been held with chaplains from the armed forces so that they can “preach responsibly” about issues involving violence against women and girls. “They were responsive to our call,” said Petia.

Ecumenical churches, and church women in particular, are well placed to bridge the country’s ethnic and tribal divides, said Petia and Peng. One of the pillars of the South Sudan Council of Churches’ Action Plan for Peace is the creation of “neutral forums for discussion,” spaces that the non-partisan church is uniquely poised to create.

“We have [had] a long period of not experiencing peace, because peace, to us, is not only silence of guns,” said Petia. “It is about freedom of expression, freedom of mobility.”

KAIROS Canada has 10 member groups, including the Anglican Church of Canada and its relief and development agency, Primate’s World Relief and Development Fund (PWRDF). The National Women’s Program of the South Sudan Council of Churches is a KAIROS-funded partner, and was recently granted $20,000 by PWRDF for peacemaking training for women in the war-torn region of Bahr-el-Ghazel. 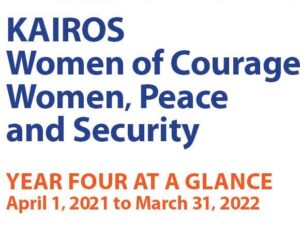