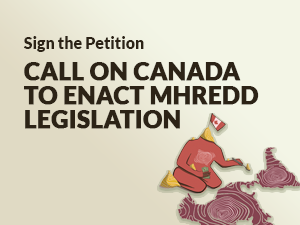 KAIROS invites you to show your support for mHREDD legislation by signing a petition to the House of Commons that is being hosted by the Canadian Network on Corporate Accountability (CNCA). KAIROS is a member of the CNCA.

The CNCA has a goal of obtaining 10,000 signatures in support of mHREDD legislation. Add your name and encourage others to sign the petition.

For years, communities in the Global South including KAIROS partners have reported on harms caused by extractive companies linked to Canada, such as water shortages and contamination, deforestation, and an increase in violence against environmental rights defenders. In response, KAIROS and networks along with other Canadian civil society actors have long called for measures to hold to account Canadian companies with overseas operations, particularly the extractive sector.

After years of advocacy from many of you, the federal government finally announced the creation of the CORE (Canadian Ombudsperson for Responsible Enterprise) in 2018 and named the Ombudsperson over a year later. Yet, the federal government has refused to grant the CORE investigatory powers to compel documents or seek legal recourse thereby rendering the office toothless.

At the same time, Canada-based extractive companies continue to harm people and the planet with the ostensible support of the Canadian government.

What is needed at this moment are multiple and complementary legally-binding measures, inclusive of mHREDD legislation. MHREDD legislation would require that Canada-based companies abroad, their supply chains, and their business partners prevent and avoid causing harm to people and the environment; and if these companies or any of their partners violate internationally recognized human rights and/or the environment, they would be held liable and would be required to provide remedy. MHREDD legislation would also establish a legal right for people who have been harmed to seek justice in Canadian courts.

Canada is actually lagging behind on mHREDD legislation. Several countries in Europe have already enacted or are in the process of developing human rights due diligence legislation.

Earlier this year, the CNCA released draft model mHREDD legislation. Over 150 groups, including KAIROS global partners, representing affected communities in more than 32 countries, have endorsed the CNCA’s draft legislation, the Corporate Respect for Human Rights and the Environment Abroad Act.

Add your name to the petition calling on the Government of Canada to enact mHREDD legislation and show support for communities across the globe that have been impacted by Canada’s extractive sector.