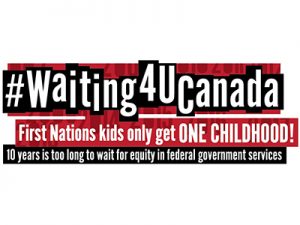 When it comes to ending discrimination against children, there is no excuse for half-measures and no time for delay.

Today marks 10 years since the First Nations Child and Family Caring Society and the Assembly of First Nations launched an historic challenge under the Canadian Human Rights Act, a challenge aimed at compelling the federal government to finally end the longstanding, systemic underfunding of First Nations children’s services.

Critically, the Tribunal, whose rulings are legally binding, ordered immediate action to ensure that First Nations children and families get the support they need without discrimination.

At the time, the federal government said it would not appeal the Tribunal’s decision. However, by failing to act quickly and effectively to fully implement the remedies ordered by the Tribunal, the government has continued to delay justice all the same.

In two further hearings, in April and September of last year, the Tribunal found that the federal government had failed to fully comply with crucial aspects of its decision. The Tribunal further noted the similarity between the government’s excuses for non-compliance and the arguments that it had used to fight the case for almost a decade.

Now, in March the case will again be before the Tribunal because of critical unresolved issues including continued underfunding and institutional and jurisdictional barriers to accessing the funding that does exist.

The fact that First Nations child and family services are underfunded was well-established long before the discrimination case was launched in 2007. Furthermore, government documents clearly show that officials were well-aware of the harm being done.

Children have grown from infancy to young adulthood in the period that government has been aware of the problems but refused to act. Because of this inaction, thousands of First Nations children have been needlessly deprived of their essential right to grown up with their families and in their cultures.

These delays and half-measures must end. Our organizations urge the Government of Canada to act immediately to ensure its full compliance with the orders of the Canadian Human Rights Tribunal.