Nearly 10,000 signatures tabled in Ontario in support of education for reconciliation 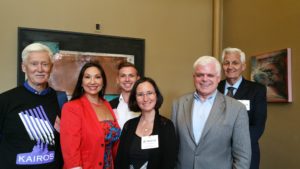 MPP Peter Tabuns (Toronto Danforth) agreed to table the bulk of 9500 signatures received so far in Ontario for the Winds of Change petition. Tabuns invited a KAIROS delegation to be his guests in the Member’s Gallery to witness the presentation.  In the end, MPP France Gélinas (Nickel Belt), the NDP Critic for Aboriginal Affairs read, signed and tabled the petitions on June 7.

On May 17, MPP Steve Clark (Leeds—Grenville and Deputy Leader, Official Opposition) tabled several pages of the petition he received from his constituents.  On June 6, MPP Ann Hoggarth (Barrie, Liberal) and MPP Daiene Vernile (Kitchener Centre, Liberal) each tabled our petition.  Vernile told the Legislature she held hundreds of signatures.  MPPs must sign any petition they table. The petition has been tabled by members from all three parties of the Ontario Legislature. If you have signed petitions please send them to the Toronto office and we will continue to ask for petitions to be tabled.

KAIROS Canada and the Legacy of Hope Foundation prepared the petitions to show MPPs that Ontarians want their government to fully implement the Truth and Reconciliation Commission of Canada’s (TRC)’s Call to Action #62.i. This call urges provincial and territorial governments to develop and implement mandatory curriculum for all students, from kindergarten to Grade 12, on residential schools, Treaties, and the contributions of First Nations, Inuit, and Métis peoples to Canada. The petition is part of KAIROS’ Education for Reconciliation initiative, which is part of the Winds of Change campaign launched in November to help advance the Calls to Action. The initiative is meant to show that there is strong public support for the implementation of this call.

“We are encouraged by the response to our Education for Reconciliation initiative,” says Jennifer Henry, KAIROS’ Executive Director. “KAIROS and Legacy of Hope have gathered signatures from across Ontario over several months. People in Ontario want their government to implement this call. The initiative’s success is testament to the momentum building in supporting right relations and reconciliation between Indigenous and non-Indigenous peoples in Canada. We chose TRC Call to Action #62.i because education has the potential to end in a generation the ignorance of our shared history that is at the root of many challenges we face today.”

At the release of the TRC’s Final Report in December, Justice Murray Sinclair applauded KAIROS and Legacy of Hope for taking immediate action on the Calls to Action and not waiting for governments to respond. In addition to the petition, KAIROS and Legacy of Hope members are meeting with Ministers and MPPs. In a recent meeting with KAIROS, Ontario Minister of Education Liz Sandals acknowledged receiving numerous letters in support of this initiative.

While the Ontario government has said it will include information about the Indian residential schools, Treaties, and the contributions of Indigenous peoples to Canada in grade school curriculum, it has not yet committed to covering all grades, including Kindergarten. Nor has the Ontario government communicated a comprehensive plan for training existing teachers, a crucial step in making curriculum changes mandatory.

Ontario is the first province to table the Education for Reconciliation petition. Petitions will be tabled in other provinces and territories in the fall.  Download and circulate petitions here.