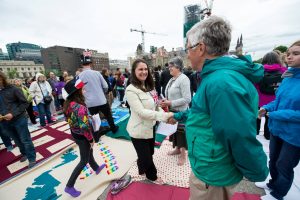 (Ottawa, ON) – Canada’s history of stolen land, broken promises and cultural genocide will unfold on Parliament Hill, June 2 from 5:00 to 7:30 p.m. with the “Kitchi” Blanket Exercise, a mass visual and participatory history lesson from the perspective of Indigenous peoples presented by KAIROS Canada and the Assembly of Seven Generations.

WHAT: Kitchi Blanket Exercise. Kitchi means “really big” in Anishinaabemowin, the language of the unceded Algonquin territory where Ottawa is located. Celebrating its 20th anniversary, the KAIROS Blanket Exercise is an interactive learning experience that teaches the Indigenous rights history that Canadians are rarely taught. Developed in response to the 1996 Report of the Royal Commission on Aboriginal Peoples, which recommended education on Canadian-Indigenous history as one of the key steps to reconciliation, the KAIROS Blanket Exercise covers more than 500 years in a one and a half hour participatory workshop.

WHY: June 2 marks the second anniversary of the release of the TRC’s 94 Calls to Action.

Three youth from Guatemala will participate in the Kitchi Blanket Exercise. They are part of a youth exchange that will bring an adapted version of the KAIROS Blanket Exercise to their country to forge improved relationships between Indigenous and non-Indigenous peoples there.

KAIROS is a faith-based social justice organization of ten Canadian churches and religious organizations. It focuses on Indigenous rights, international human rights and ecological justice. We

deliberate on issues of common concern, advocate for social change and join with people of faith and goodwill in action for social transformation. Learn more: www.kairoscanada.org.

About Assembly of Seven Generations (A7G)

A7G is an Indigenous owned and youth-led, non-profit organization focused on cultural support and empowerment programs and policies for Indigenous youth while being led by traditional knowledge and Elder guidance. Learn more: www.a7g.ca