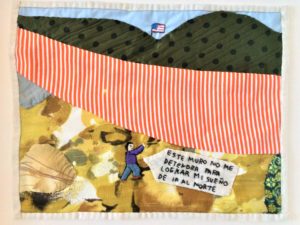 On the week of International Human Rights Day and the 70th Anniversary of the Universal Declaration of Human Rights, KAIROS, along with representatives of churches and communities of faith, have signed a letter to Prime Minister Trudeau asking the Government of Canada “to intervene and condemn the human rights violations that are occurring” at the Mexico/United States (U.S.) border. While this letter importantly addresses the criminalization of migration and the militarization of the border, KAIROS would like to offer some further context.

What is typically being described as “the migrant caravan” is a series of caravans that have departed on different dates from various locations across Central America beginning in mid-October. Most migrants in these caravans are from Honduras, Guatemala, and El Salvador. While the caravans have garnered much media attention, mass migration from Central America towards the U.S. is not a new phenomenon. Instead, migrants are leveraging caravans to increase their chances of safely reaching the U.S and to raise awareness about the situations of extreme poverty, violence and impunity that compel them to leave their countries.

The mobilizations of Central American migrants, much like those of their counterparts from Africa and the Middle East who have travelled or are travelling to reach the European Union, are peaceful political formations

Migration to the U.S., via Mexico, is a dangerous endeavor. Since the beginning of Mexico’s “Drug War” in December 2006, at least 250,000 people have been murdered and tens of thousands are missing in what Human Rights Watch called in 2013, “the most severe crisis of enforced disappearances in Latin America in decades.” Many of the missing include Central American migrants. According to 2016 estimates, over 20,000 Central American migrants have disappeared on their trek northward. Mexico’s “Drug War” and the violence, impunity, and marginalization exacerbated by neoliberal economic policies have created the circumstances where the most marginalized are cast as disposable.

Central American migrants are also travelling in caravans due to harsh Mexican and U.S. immigrant laws. Through Programa Frontera Sur, the government of Mexico, in accordance with the U.S., regulates migration not only at Mexico’s northern and southern border but also well within the nation’s boundaries. Similar to how U.S. and Canada enforce their borders inside state territories through police checks and carding policies, that some claim are forms of racial profiling, Mexico is now following similar protocols. The use of caravans is thus a strategy of survival, even a form of activism, that calls attention to the uneven consequences of North American borders that are militarized so that they remain open to some but not all people.

While violence and poverty are offered as explanations for the apparent recent surge in migration from Central America, climate change is also a fundamental driving force. Changing weather patterns are negatively affecting the geographic area known as the “Dry Corridor.” Along the west coast of Honduras, Guatemala, El Salvador, and Nicaragua, where most people depend on subsistence farming, persistent drought conditions are impacting crop yields and clean water availability, which in turn lead to food and water insecurity and displacement in the region. Available U.S. data shows a rise in the number of Central American migrants attempting to cross the U.S./Mexico border beginning in 2014, which coincides with a severe drought brought on by the El Niño effect that year.

In addition to intervening in and condemning the human rights violations taking place at the Mexico/U.S. border, KAIROS urges the Government of Canada to repeal the Safe Third Country Agreement with the U.S.. Suspending the agreement would acknowledge how the U.S. government’s immigration policies produce unsafe conditions for refugee claimants and would provide migrants options to find refuge in Canada.

KAIROS also recognizes the need to strengthen policies that protect the rights of migrants and refugees in Canada. Canada’s temporary workers programs have made it extremely difficult for migrant workers to become permanent residents, leading to widespread complaints and well-documented cases of exploitation and abuse. KAIROS urges the Canadian government to grant permanent residence on arrival to foreign migrant workers. Furthermore, we reiterate our call for Canada to ratify and implement the International Convention on the Rights of All Migrant Workers and Members of their Families, and the ILO Convention #189, which recognizes domestic work as work.

KAIROS remains committed to addressing the causes of forced migration, while promoting a climate of dignity and welcome for uprooted people all over the world.