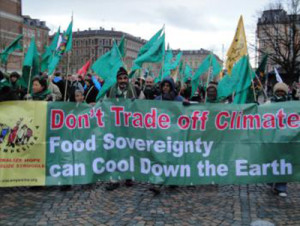 As the Paris climate conference approaches, I’ve been asking myself how KAIROS might best contribute. My conclusion is that amplifying the voices of Indigenous peoples is the most important role we can play.

Many KAIROS partners take positions that reinforce our own analysis: the need to keep most fossil fuels in the ground; to reject market mechanisms that allow affluent peoples to go on emitting greenhouse gases by purchasing offsets from low-income countries; the need to mobilize resistance to destructive resource extraction projects; and to demand that those who consume more than their fair share of the world’s carbon dioxide absorption capacity pay their ecological debt.

Although I certainly identify with these demands of the climate justice movement, echoing them is not enough. While calling for a global mass movement to mobilize for climate justice, Tom Goldtooth, Executive Director of the Indigenous Environmental Network, reminds us that our activism must also “involve a spiritual awakening….The people of the world must re-evaluate what their relationship is to the sacredness of Mother Earth.”

Recognition of this spiritual dimension is growing among climate justice activists. For example, Oilwatch South America’s recent declaration on leaving fossil fuels underground is subtitled, “A Declaration for the Health of Mother Earth.” It begins with a call to honour the sacred relationship Indigenous peoples have with Mother Earth and to respect their leadership in restoring a sacred and beneficial relationship with the natural world.

Following Indigenous teachings on the reciprocal relationship between humans and the Earth has profound implications for how we view potential responses to climate change.

The dominant culture emphasizes technological solutions whereby humans further manipulate the natural world to undo harm done since the beginning of the Industrial Revolution. The epitome of this approach is geoengineering, i.e., the artificial modification of the Earth’s natural systems to bring down temperatures.

Take for example proposals to pump sulfate particles 30 kilometers into the stratosphere to block solar radiation, an attempt to imitate the natural cooling that occurs after volcanic eruptions. This technology would not stop us from emitting more greenhouse gases, just mask their effects. While this proposed “solution” might slow down warming in the North, it would likely have negative impacts on tropical and subtropical agriculture, increasing hunger in the South.

Indigenous peoples are in the forefront of resistance to these and other false solutions to climate change that violate human rights, disrupt natural ecosystems, or allow those who pollute most to avoid responsibility to end emissions at their source.

Consider the Reducing Emissions from Deforestation and Forest Degradation, or REDD, program under negotiation at the UN climate talks since 2005. In theory, REDD rewards developing countries for maintaining forests intact as stores of carbon. Credits for this sequestered carbon can be sold to states or corporations to offset greenhouse gas emissions that exceed their caps or quotas.

However, a report by Friends of the Earth International shows how some REDD projects have worsened tensions around land tenure and access to resources. Several of these projects have been imposed on Indigenous Peoples without their free, prior and informed consent as required by the UN Declaration on the Rights of Indigenous Peoples. Moreover REDD projects often ignore local ecological knowledge and interfere with food security.

The Indigenous Environmental Network (IEN) strongly opposes REDD projects that turn forests over to private ownership. Declaring that “forests must be rescued because they are the lungs of Mother Earth,” the IEN calls for Indigenous peoples to be “free to care for their forests in [accordance with] their cultural, spiritual and historical role.”

Another example of a tension between technological and Indigenous worldviews is found in debates on agriculture and climate change. The industrial food system is characterized by the use of chemical fertilizers, heavy farm machinery, long-distance transportation, factory food processing and over-packaging. Furthermore, it results in the waste of enough food to feed all who go hungry and is estimated to be responsible for about half of all human-generated greenhouse gas emissions.

Some agribusiness companies, fertilizer manufacturers, purveyors of genetically modified seeds and food retailers are promoting the concept of “climate smart agriculture” as a solution to both climate change and food insecurity. Critics accuse these corporations of greenwashing.

La Via Campesina, a global alliance of small farmers and Indigenous peoples, rejects climate smart agriculture as a continuation of the industrial food system under a new name. Instead  La Vía Campesina promotes food sovereignty based on peasant agroecology, traditional knowledge and selecting, saving and sharing local adoptive seeds. It advocates local control over lands, biodiversity, waters, and territories as a true, viable, and just solution to a global climate crisis.

They fear that “investments in carbon credits generated from farmlands involved in climate smart agriculture projects will increase speculation in the carbon market, leading to further ‘carbon land grabs’ by large-scale investors and producers, and the further displacement of peasant and smallholder farmers, just as REDD displaces Indigenous people.

At the Via Campesina camp during the UN Climate Conference in Cancun, Mexico, I saw a banner proclaiming “Framers Cool the Earth.” There is sound science behind this claim. Whereas large-scale industrial agriculture depletes organic matter from the soil while spewing carbon dioxide into the atmosphere, small scale sustainable farming could capture 24 per cent to 30 per cent of excess CO2 from the air while rebuilding soil fertility.

Accordingly, La Via Campesina declares: “Any method of production and consumption, to be truly sustainable, must enrich and protect Mother Earth.”