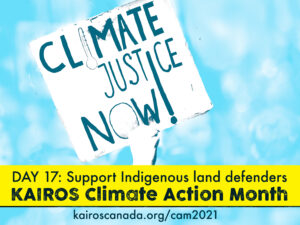 “Advocacy and direct action by Indigenous Peoples in opposition to threats to lands, waters, air, and future generations are not optional measures by those that adhere and live by traditional Indigenous knowledge. They are obligations.”

The report also calculated the potential impact of ongoing struggles concluding that if these “struggles prove successful, this would mean Indigenous resistance will have stopped greenhouse gas pollution equivalent to nearly one-quarter (24 percent) of annual total U.S. and Canadian emissions.” This is the equivalent pollution of approximately 400 new coal-fired power plants or taking 345 million passenger cars off the road.

Furthermore, Indigenous land defenders face legal challenges and are criminalized for occupying their land and for simply exercising their inherent right to self-determination.

In an article from 2020, KAIROS notes, “The criminalization and stigmatization of land defense is a recurring pattern across the region. Land and water protectors, especially women, are regularly deemed “anti-development,” “radicals,” and even “terrorists.” For their efforts, some land defenders are ostracized from their communities while others face the additional risk of being physically threatened and attacked by state and non-state actors. Front Line Defenders and Global Witness have expressed concern over the number of killings of human rights defenders working on the intersection of Indigenous rights and the environment across the globe.”

For today’s action, we invite you to support Indigenous land defenders opposing threats to lands, waters, air, and future generations. Here are some organizations that you can support financially or through acts of solidarity: