Large-scale resource extraction exacerbates the threat of COVID-19 across the American hemisphere, especially for Indigenous peoples 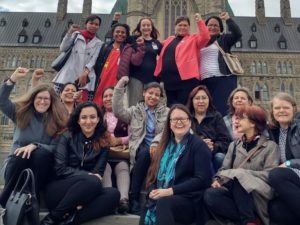 Women Land Defenders on the Hill, 2018

Women Land Defenders on the Hill, 2018

Across Abya Yala and Turtle Island, territories otherwise known as America, governmental and corporate responses to and amid the spread of the novel coronavirus have put into sharp focus the crisis of the status quo. This is especially true of large-scale resource extraction. The grave threat posed by COVID-19 across the American hemisphere, especially to Indigenous peoples, is exacerbated by extractivism and many Indigenous communities are demanding that extractive operations cease immediately across the hemisphere given their potential to magnify the spread and effects of the coronavirus.

Yet, deemed an essential service by governments, the extractive industry continues mostly unencumbered by the public health measures imposed on other industries and a large majority of the world’s population to contain the pandemic. The extractive sector is endangering its workforce as well as the lives of  communities, many of them Indigenous, who live near project sites. As MiningWatch Canada outlines in the statement “COVID-19: Mining Companies Putting Workers and Communities at Greater Risk,” extractive operations, especially mining, facilitate the spread of the coronavirus. The transitory and confined nature of mine labour, the distance of project sites from medical facilities, and the limited access to public health services, and often to clean water, in Indigenous communities create ideal conditions for the proliferation of COVID-19.

The Shuar Arutam in Ecuador have raised the possibility that a COVID-19 outbreak in their territory is connected to one of the largest mining conventions in the world. The Xinka in Guatemala made the decision to temporarily withdraw from their peaceful resistance camp and have denounced the company’s attempt to leverage the situation by providing the community basic needs on the condition of their consent. In Canada, Indigenous peoples such as the Tiny House Warriors in Secwepemc territory, Wet’suwet’en hereditary chiefs, and the Union of British Columbia Indian Chiefs, are demanding a halt to the construction of pipelines and dams.

The Unist’ot’en People of the Headwaters and the Tiny House Warriors continue their grassroots efforts to halt the ongoing threats to their communities created by the existence of man camps and the impacts of resource extraction. In light of COVID-19, the struggle must now shift towards limiting exposure to this deadly virus. Because of the magnitude of resource extraction on their territory the Wet’suwet’en have not been able to exercise their right to sovereignty  by limiting road access to anyone who is not a resident.

The Coalition for the Human Rights of Indigenous Peoples, comprised of Indigenous Nations, national and regional Indigenous peoples’ organizations, human rights groups, and individual experts and advocates throughout Turtle Island (North America), have issued a call for governments to respect the right of Indigenous peoples to set conditions of entry into their territories.

While Indigenous communities are calling attention to the public health risks and human rights abuses heightened by large-scale resource extraction, governments are easing or removing legislative barriers to resource extraction and environmental monitoring. Mexico’s nationalized oil company is allegedly destroying a mangrove to build a refinery. In Canada, the Alberta provincial government suspended environmental reporting requirements for industry and the Government of Ontario has loosened its laws around consultation citing the COVID-19 pandemic.

All the while, many governments across the hemisphere are passing legislation to criminalize land defense. The province of Alberta, for example, has recently introduced a bill, the Critical Infrastructure Defence Act, which would severely penalize anyone found to have directly or indirectly supported mobilizations such as blockades.

The criminalization and stigmatization of land defense is a recurring pattern across the region. Land and water protectors, especially women, are regularly deemed “anti-development,” “radicals,” and even “terrorists.” For their efforts, some land defenders are ostracized from their communities while others face the additional risk of being physically threatened and attacked by state and non-state actors. Front Line Defenders and Global Witness have expressed concern over the number of killings of human rights defenders working on the intersection of Indigenous rights and the environment across the globe.

The situation in Colombia is especially worrying. Despite the peace agreement between the federal government and the FARC, the largest guerilla group, the UN Special Rapporteur on the rights of Indigenous peoples  reports that ninety percent of the reported 181 attacks that occurred in Colombia against land and water defenders between 2015 and 2019 called attention to four industries: mining, fossil fuels, agriculture and livestock, and hydroelectric dams. According to Colombia’s Institute of Studies for Development and Peace,  to date, at least 15 social leaders have been killed since physical distancing measures were put in place.

Across the American hemisphere, numerous communities on the frontlines in the protection of Mother Earth are raising their voices, and, in some cases, risking their lives to speak out against  the  reliance of states and corporations on extractivism, behaviour that continues to damage the planet and has worsened  this global pandemic.

This crisis requires urgent action by governments and corporations.  As such we call on governments to immediately order extractive companies to cease all operations to curtail the spread of this pandemic.

Furthermore, we look forward to a future where: