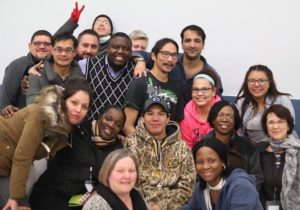 On February 1 and 2, KAIROS’ Alfredo Barahona travelled to Saskatoon to attend the second Indigenous and Newcomer Friendships for a just and inclusive community event. The first was in Fredericton in October 2017, with more to come in Thunder Bay, Winnipeg and Edmonton. KAIROS believes Canada’s future can be strengthened by building relationships of respect and solidarity between newcomers and Indigenous peoples.

Here is Alfredo’s reflection on his time in Saskatoon.

It was minus 25 in Saskatoon on February 1, but the thought of meeting with Indigenous people and newcomers to explore reconciliation warmed me up. I walked to the Saskatchewan Intercultural Society for the Community Café: Reconciliation, Building relationships and Understanding, the first of four events KAIROS has organized with support from Canadian Heritage’s Canada 150 Fund.

Elder Leona Tootoosis from the Poundmaker First Nation welcomed us and offered a prayer to open the event:

“I prayed in my own language for a good gathering. We really need this. I am glad this is happening. Hope this will happen in other places.”

I think to myself: “And I am so glad to hear from an Elder that we need this and that it should happen in other places.” I remember how in New Brunswick, Maliseet Elder Alma Brooks from St. Mary’s First Nation said the same thing. I am so grateful to be able to witness reconciliation in action between Indigenous peoples and newcomers across this land.

Traditional music played by Anas Mohamad, a six grader and refugee from Syria, mixed with the voices of people in the back of the hall and made the place feel alive. Delicious food including Bannock was served in the middle of the room.

Twelve circles with chairs invited the guests to join conversations about what reconciliation means, led by an Indigenous or newcomer story teller.

In one of the circles someone asked: “Do you actually need to say the word reconciliation to practice reconciliation?” Good question.

“The Constitution of 1982, where Canada recognizes Indigenous peoples’ right to their land, is upside down,” he said to a circle of mostly newcomers. “We had rights to our land before Canada existed. The Treaties are sacred agreements to share this beautiful land.”

At the end I thanked the organizers and participants. I told them how thankful I was to witness what they are doing in their communities, and how I could feel my emotions running through my veins to be there with them. Being with them inspired me especially as I was about to leave for Edmonton to help prepare for the Indigenous and Newcomer Friendships event in March.

At 8:30 in the morning I walked to the Saskatoon Indian and Métis Friendship Centre. Again it was minus 25 but with the wind chill it felt like minus 36!

One side of the Centre’s gym was covered with blankets for the KAIROS Blanket Exercise. Tables and chairs to accommodate small group discussions were set up on the other side of the gym.

“Good Morning Creator Great Spirit, Mother Earth, Ancestors in the Spirits work, Grand Fathers and Grand Mothers. Miigwetch for the light, the water, the land and the people we are here with today. Give us courage to learn to live together and respect one another.” This was Elder Walter Linklater opening the KAIROS Blanket Exercise and welcoming newcomers to the traditional homeland of the Métis, and Treaty Six territory.

After the KAIROS Blanket Exercise we were treated to traditional dance. First there was a Round Dance led by the Linklater family. Lyndon Linklater, a Cree and Ojibwa traditional knowledge keeper and story teller, was on the hand drum. Then Randi from Big Stone Cree Nation offered beautiful solo dances. Before she danced, Randi said:

“I was taught to pray for myself, my family, Mother Earth, people who are suffering many illnesses, while I am dancing.” Then a group of dancers from Russia shared a beautiful traditional dance.

But this event wasn’t only about admiring each other’s dances. We learned why we dance and reflected on why we are here and how we share common struggles in our history.

“Reconciliation, that’s what you are doing here today,” said Lyndon.” You invite us to share our culture with you. You invite others to come and share with you. We all want to be happy. But we are mean to one another sometimes because of the colour of our skin, because of the way we talk. But we are trying to get better. I am so happy you invited my father to come and pray before we started the activities today.”

We acknowledge the financial support of the Government of Canada. 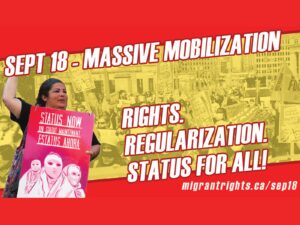