In honour of Berta Cáceres Flores: reflection by Heryka Miranda 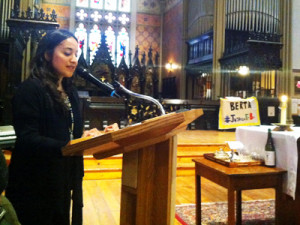 At the memorial for Berta on Sunday March 13, at Church of the Holy Trinity in Toronto, Heryka Miranda, read the reflection below.  Her words echo how many of us feel:

Hermana Berta, there are millions of Berta’s and I am one of them. I am coming out of the shadows – exploring the sounds and vibrations that comes from within me to honour you. Confronting my fears and holding my governments accountable. Using whatever power I may have due to my privilege as a Canadian and US American citizen. I am forever impacted by your beauty and light in physical form and your ability to ignite the hearts and senses of the many that you touched.

Heryka got to know and love Berta through her work in the movement, COMPA, a coalition of social movements of meso America.  In the early 2000s, Inter Church Action and then KAIROS also supported COMPA and, like Heryka, those who met her were deeply moved by her vibrant presence, courage, her kindness and, above all, her strong commitment to her people and Mother Earth.

Good afternoon, my name is Heryka:

I met Berta Cáceres while working on the coordinating team for the Convergence of Movements of the Peoples of the Americas (COMPA).

Berta cofounded COMPA — a collective of 220 individuals representing grass-roots organizations from 16 Latin American countries, several dozen Indigenous nations, and eight international networks. The aim of COMPA was to strengthen solidarity among organized communities that are directly impacted by corporate globalization throughout the Americas.

At the time I was working in Washington, DC with human rights, faith-based, soli-darity organization – The Ecumenical Program on Central America, Mexico and the Caribbean, EPICA who was also part of the COMPA collective.

The first time I met Berta was at the first COMPA general meeting in 2000 in Chiapas, Mexico. Her enchanting and humble spirit brought ease and comfort to me as it was the first time that I was part of an international coordination team. Berta’s smile, gaze and words spoke volumes in terms of the love and respect she had for mother earth, the waters, and for the courageous women on the frontline of resistance movements around the world; to protect precious natural resources; while at the same time challenging gender roles. Her presence ignited enthusiasm, motivation and momentum. An open invitation for everyone and an-yone to be involved in the global movement and struggle to make another world possible. Another world without capitalism, patriarchy, colonialism and imperial-ism. She invited us to dream of a world of equality and respect for the land and its natural resources. She invited us to fall in love and be in love with the heart-beat, blood and breath of the earth and to create meaningful and profound rela-tionships from this sacred place with each other.

When Berta was awarded the prestigious Goldman Environmental Prize last year, she stated in her acceptance speech that her people, “the Lenca people are ancestral guardians of the rivers, protected by the spirits of little girls, who teach that giving their lives in various ways for the protection of the rivers is giv-ing their lives for the well-being of humanity and all those of this planet.” As her daughter Olivia said, “ My mother died because she defended the land and rivers of her country.” As I listen to these words from Berta’s daughter, I hear her moth-er. I hear the voice of the sacred rivers in desperate need of help. How do we

help this young woman who lost her mother for protecting the rivers and land of Honduras from further exploitation, violence and despair? How do we ensure that Berta’s children and the children of Honduras and around the world have a sus-tainable planet. Berta’s assassination has left me…has left many of us with an important call for action and question…what it is that I…that WE would sacrifice for the planet, for the waters of the earth, for humanity? Berta is calling for us as a global family to WAKE UP because we are simply running out of time.

Her spirit now spreads through the echoes and sounds; the ripples and currents of the River Gualcarque. The river she promised to protect and organize with the community of Rio Blanco. The river that now bares her soul.

Hermana Berta, there are millions of Berta’s and I am one of them. I am coming out of the shadows – exploring the sounds and vibrations that comes from within me to honour you. Confronting my fears and holding my governments accounta-ble. Using whatever power I may have due to my privilege as a Canadian and US American citizen. I am forever impacted by your beauty and light in physical form and your ability to ignite the hearts and senses of the many that you touched. The last time our paths crossed was in 2005 in Caracas, Venezuela for another COMPA meeting. I remember our reunion, especially the hugs and laughter. I honour you hermana and am so deeply grateful for the opportunity to have met and be held by your grace and warrior strength. I love you!

Heryka met Berta Caceres through her work with the Convergence of the Move-ments of the Peoples of the Americas, and Gustavo Castro Soto during her time with the Ecumenical Program on Central America, Mexico and the Caribbean.

Heryka is a social change dance artist and mature graduate student in the Facul-ty of Applied Health Sciences at Brock University in St. Catharines, ON. Her re-search study explores the experiences of Mexican and Guatemalan, Niagara-Region migrant farm workers’ participation in experiential dance/movement ther-apy sessions. Her research aims to provide temporary relief to feelings of isola-tion, loneliness and homesickness – often experienced by the precariousness of migrant farm workers’ employment. 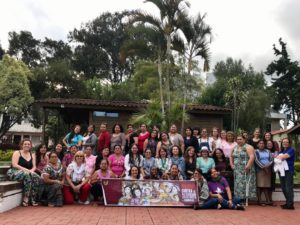 Court ruling of women defenders of nature and peoples against mining 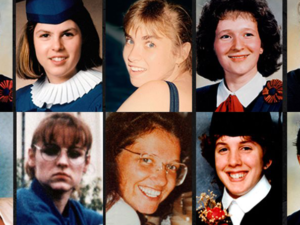 KAIROS remembers the women killed in Montreal 30 years ago