In Fracturing, Unity: Reflection on the Situation in Elsipogtog 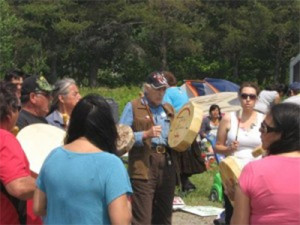 On September 30, members of Elsipogtog First Nation and their allies began a blockade to prevent SWN Resources Canada from conducting exploratory seismic testing on Elsipogtog territory.  On October 17, the RCMP moved in to enforce an injunction ending the blockade.

The media has since been flooded with images of police in riot gear, snipers in fields, physical confrontations, and police cars set afire.  The struggle has been reduced to the level of “just another native protest.” But the issues that have led to this and many other actions to date have brought together Indigenous and non-Indigenous peoples.  As James Anaya, the UN Special Rapporteur on the Rights of Indigenous Peoples, said in a statement on his recent fact-finding trip to Canada, “the public interest is not opposed to, but rather includes, aboriginal concerns.”  In New Brunswick and across Canada, concerns about hydraulic fracturing (fracking) have been uniting people across diverse communities.

In his statement, the  UN Special Rapporteur also observed that “resource extraction should not occur on lands subject to aboriginal claims without adequate consultations with and the free, prior and informed consent of the aboriginal peoples concerned.”

There has long been a debate over fracking for shale gas in New Brunswick. Much of the proposed development is on traditional Mi’kMaq territory, including the territory of Elsipogtog First Nation.  Former Elsipogtog  Chief Susan Levi-Peters has explained to the media that while the treaty relationship compels the government to consult First Nations on resource extraction,  “we have been asking for consultations for three years now and nothing has happened.”   She also cited her responsibility as an Indigenous person to care for the earth and the water in the face of development projects such as fracking.

KAIROS has long advocated for an ecological economy, one that is built upon the foundations of Indigenous rights and respect for all of Creation, and that reduces our reliance on fossil fuels. KAIROS is also deeply engaged in Canada’s process of Truth and Reconciliation and believes that, if we are to be genuinely reconciled with our history and to each other, we need to chart a new path forward.

For many, the events at Elsipogtog bring back memories of Oka and Kanehsatà:ke in 1990. Those events brought forth the Royal Commission on Aboriginal Peoples (RCAP), which recommended that Canada chart such a path, one of mutuality and respect. The majority of those recommendations have languished on the nation’s bookshelf since 1996.

We are now, in this time of reconciliation, in this moment at Elsipogtog, and within the larger struggle around resource extraction on Indigenous lands in Canada, offered the opportunity at renewed relationship again.  Ellen Gabriel, a member of the Longhouse of Kanehsatà:ke, was actively involved in the 1990 struggles.  In a message to Elsipogtog that all Canadians should hear, she said: “Reconciliation should be more than words on paper. There should be action. There should be love. And there should be compassion.”

We pray for a just and peaceful resolution to the situation at Elsipogtog.

One source of information for solidarity actions with Elsipogtog is Idle No More.