Chat with Activists: Hannah Gehrels on shaping change for the better 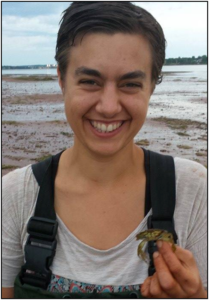 Originally from Thunder Bay, Hannah Gehrels makes Charlottetown her home. Hannah has a Masters in Biology from the University of Prince Edward Island, and currently runs an outdoor program for kids called Wild Child Forest School Program through the Sierra Club Canada Foundation. Hannah has helped to organize and co-facilitate several Blanket Exercises in the Charlottetown area, and she participates in the PEI Action Group for Migrant Worker Rights. In 2017, she was part of a KAIROS-led delegation to Guatemala. Hannah is 27 years old.

In the lead up to Streams of Justice: Atlantic Gathering 2019, we asked Hannah her thoughts on being a young activist in the Atlantic region. The following has been edited for length.

You studied at the University of P.E.I. What made you stay in Charlottetown?

The community is what absolutely keeps me in Charlottetown and PEI and the Atlantic provinces. There is a wonderful community of people who are trying to change the world and share a similar vision of what justice looks like. I learn a lot from it – particularly collaboration. It’s something I want to be part of.

At what age did you become an activist?

That’s a hard question. When does it start really? We all have different seeds that get planted at different times and you engage to change the world through activism in different kinds of ways.

My first introduction to political activism was through the Ancient Forest Alliance in B.C. They advocate for and protect old growth forest in the province. I found out about them during my undergrad in Biology at Simon Fraser University, where I studied Conservation and Ecology. We did some door-to-door knocking, organized rallies and letter writing campaigns. We did a lot of hikes to build community, learn about native plants and native forest, and raise awareness to lobby politicians to protect the forest. We rallied around a few forests to make sure they weren’t logged.

It was a nice introduction to activism in terms of where I was at during that time.

What are you focused on in Charlottetown?

Environmental issues will always hold a place in my heart and something I will always be involved in, but other issues around equality have also really caught my energy since moving to Charlottetown. I’ve been involved in building queer community on the Island, specifically helping give space for queer youth to support each other. And I’ve also gotten really involved in the movement for more affordable housing. The vacancy rate in Charlottetown is 0.2 percent and we’re dealing with a situation where people cannot afford to have a house.

I also am involved with the PEI Action Team for Migrant Worker Rights through the Cooper Institute. We are developing relationships with migrant works here, and advocating for more just living and working conditions provincially and federally.

How did you become involved in migrant rights?

There was an excellent community forum organized by Josie Baker of the Cooper Institute. Anyone could come and learn about migrant workers in Canada and PEI. It was a one day event. I learned a lot and met a lot of people. At the end of the day you could sign up to be more involved – that’s where the action team was born.

Was there a story that touched you?

I was outraged, angered at the way the federal government has set up the Temporary Migrant Foreign Workers’ Program – systematically and systemically putting people in precarious positions. It’s just not okay. It’s secondary citizen stuff.

You went to Guatemala too. How did that come about?

I learned so much during that trip. The relationships we built with each other were impactful and I learned so much about the history of Guatemala – the similarities of the experiences of Indigenous people around the world. It’s unique and also the same in terms of how colonialism affects countries and people.

Why is activism in Atlantic Canada so important or unique?

If you look across Canada at volunteer rates, the Atlantic provinces are much higher than the rest of the country. People are willing to give of their time and money here. That is indicative of a different way of being.

We are also smaller. People are connected to each other more. There is something unique too about what it looks like to work with each other in communities. When you are a smaller place, even if you disagree with each other, you know you’re going to end up around the same table, caring about the same issues in the future. Relationships become really important so it’s not just about disagreeing and going about your separate ways and not seeing each other. It’s about working through issues – interpersonal dynamics – because you both care about the same issue and want to work together. I think that’s really awesome.

What is your advice to folks in Atlantic Region on getting involved?

I think it’s important to get involved for lots of reasons. There are so many things going on in the world right now to easily feel down about. I remember that quote by Octavia E. Butler – “All that you touch you change. All that you change changes you.” We have capacity. Change is happening in the world, whether we’re involved or not. We have quite a big capacity,each person – each one of us – to help shape that change for a more just world we want to be part of.

Are there older activists who inspire you?

Definitely. Yes. Particularly this really incredible community activist named Ann Wheatley who I think is amazing. I learn a lot from her about being humble and not letting your ego get in front of you. I learn a lot about the importance of following the lead by those who are most effected by the issue at hand, and organizing with that model. I also learn about organizing in a way that involves your heart, not just your head, andthe importance of relationships, not just what you want to see happen or make happen.

Streams of Justice: Atlantic Canada Gathering runs from May 2-5 at Mount Allison University in Sackville, NB on the ancestral and unceded territory of the Mi’kmaq. Group rates available. Register by April 15. Learn more and register: kairoscanada.org/atlanticgathering 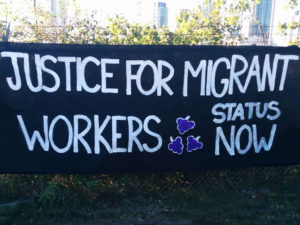 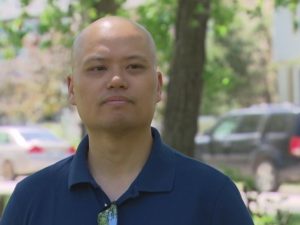 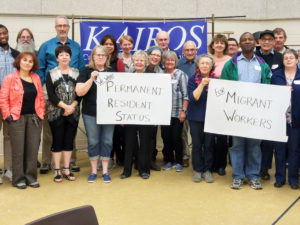 From disposable to indispensable: providing foreign migrant workers with a pathway to permanent residency