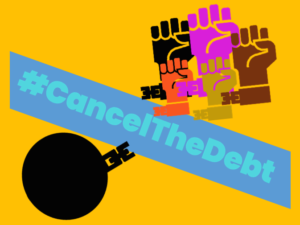 KAIROS has long grappled with global South debt cancellation in a just transition and urged Canada to speak up for the global South in multilateral meetings.

Supporters of debt cancellation renewed their call for permanent solutions in the wake of a weaker-than-expected “common framework for debt treatments” announced November 13th by G20 finance ministers and central bank governors.

The framework “again falls short of adequately addressing the debt crisis that has been on the horizon and accelerated by the global Covid-19 pandemic,” said the African Forum and Network on Debt and Development (AFRODAD).

More than US$300 billion is being spent each year by countries in the global South for public external debt payments to bilateral and multilateral lenders, including the World Bank and the International Monetary Fund (IMF), private banks and investors in government bonds and securities.

The G20 plan came after a global week of action for debt cancellation that brought together 560 organizations (including KAIROS and several of its partners). In many countries, the Covid-19 pandemic has provoked an economic recession, increased inequality and further delayed action on the climate emergency.

“KAIROS shares profound disappointment with the G20 debt framework,” said Jennifer Henry, Executive Director. “It fails to grapple vigorously with current and historic inequities between the global North and South. It is a missed opportunity to share resources needed to respond to the current pandemic. Debt continues to stand in the way.”

In Africa, Zambia is on the verge of defaulting on its debt payments after failure of bondholders to agree on terms of deferred debt settlement with the government. This, said AFRODAD, is just one of the many cases of the worsening debt crisis in Africa where many countries are either already in debt distress or looming on its edge.

After parts of Central America were devastated by two massive November hurricanes, Guatemala’s conservative president, Alejandro Giammattei, called for an end to a “vicious cycle” of taking on debt every time natural disasters strike Central America. “This human development won’t be achieved easily and simply through speeches, it will require actions, and actions that come from industrialized nations,” Giammattei said. The government of Guatemala, like those of neighbouring Honduras and El Salvador, has been accused by Jubileo Sur/Americas and other groups of not taking sufficient steps to protect their people in the face of hurricanes and earthquakes.

The G20 framework fails to provide a mechanism for permanent solutions to debt crises, said the U.K.-based Jubilee Debt Campaign. The framework allows for rescheduling of debt payments to other governments, but not reducing or cancelling the debt.

The G20 agreement says debtors should seek the inclusion of private lenders in debt regarding scheduling, but does not create a needed enabling mechanism or say what should happen if private lenders refuse to join. “The G20 framework has not adequately addressed the role of private creditors given that this is a problematic area for African countries and the mechanisms needed to bring [private lenders] to the table,” said AFRODAD.

Another concern is that the framework applies to only 73 of the world’s poorest countries, leaving out middle-income countries, which in some cases are also facing significant debt burdens. “Unfortunately, developing middle-income countries are excluded from this process as they face some of the highest poverty increases because of the coronavirus crisis,” said Eric LeCompte, executive director of the Jubilee USA network and a United Nations finance expert.

As stated in the letter for Global Week of Action for Debt Cancellation, the debt problem “stands in the way of people’s survival, the fight against inequality, the realization of their human rights, sovereignty and the self-determination of peoples, economic, gender and ecological justice, and the pursuit of a dignified life.”