Re-engaging on Global South debt cancellation in a just transition 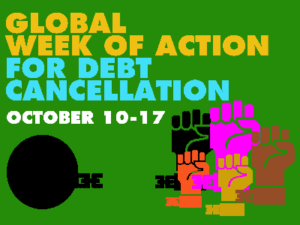 KAIROS partners, members and allies are renewing calls for debt cancellation as the crisis provoked by the Covid-19 pandemic intensifies. In many countries, the pandemic has provoked an economic recession, increased inequality and further delayed action on the climate emergency.

At the turn of the millennium, 640,000 Canadians signed petitions advocating for unconditional debt cancellation. “They will be familiar with this clarion call for justice, made now in the crisis of the pandemic,” said Jennifer Henry, Executive Director of KAIROS. “It is a justice unrealized.”

The petition drive at that time was a key moment in the Canadian Ecumenical Jubilee Initiative for debt cancellation and the formation of KAIROS in 2001.

This October 10-17, KAIROS and many groups are coming together for a Global Week of Action for Debt Cancellation.

As the pandemic threatens, among other things, to overwhelm chronically-underfunded public health systems in many countries in the Global South, their governments are also paying more than U.S.$300 billion each year to international financial institutions (IFIs) like the International Monetary Fund (IMF) and regional development banks.

“This is money that is vitally needed for public investment on vital healthcare to fight COVID-19, economic and structural assistance to affected, vulnerable and marginalized individuals, families and communities, and building economies towards more just, equitable, climate resilient and sustainable systems,” says a letter to be sent October 14th to governments, IFIs and lenders by Global Week of Action .

The letter is critical of measures already undertaken by the IMF and G20 governments that had earlier announced temporary debt payment suspensions. These measures, the letter states, do not cancel debt but merely delay payments by some countries.

“It is a travesty of justice that countries in the Global South will end up with even more debts in the face of the multiple crises,” adds the Global Week of Action letter.

WoMIn Women’s Alliance, the Johannesburg-based network of African women’s organizations and KAIROS solidarity partner, is calling on the African Union, African heads of state, the IFIs, Chinese lending bodies and private creditors for “a total and unconditional cancellation of African debt” to which organisations, global platforms and campaigns have signed-on.

The temporary moratorium proposed by the IMF and G20, argues WoMin, “is not the right solution in these exceptional circumstances, because it is a deferred repayment that will continue to hang over the heads of African countries like the Sword of Damocles.” Additional flows “will be in the form of loans that will only inflate the external debt of these countries.”

WoMin also compares the cost of African debt cancellation to the Covid-19 relief packages approved for spending in countries of the Global North. “Africa’s debt is estimated at US$365 billion this year which equals 16.6% of the US$2.2-trillion response plan adopted by the United States, and 42% of the recently announced European Union joint debt economic relief package.”

CIDSE—the global network of Catholic development and relief groups that includes Development and Peace/Caritas Canada (a KAIROS member) – along with ACT Alliance Europe members is sending a letter from church leaders to the boards of the IMF and World Bank during the week of October 12th. The letter calls for debt cancellation as part of a Jubilee Debt Relief initiative, echoing similar actions in year 2000.

Earlier, about 200 organizations (including Cooperation Canada, formerly known as Canadian Council for International Co-operation) signed a call for a “debt jubilee” to tackle the Covid-19 health and economic crisis.

Debt cancellation is one field of action intended to provoke new measures by IFIs and governments in months ahead.

The October 10-17 dates were chosen by the Global Week of Action because they embrace events like the IMF-World Bank annual meetings, the annual “Cry of the Excluded” observed in Latin America on October 12, a meeting of G20 finance ministers and central bank governors on October 14, World Food Day on October 16, and the International day for Eradication of Poverty on October 17.

The resurgence of debt cancellation initiatives in face of renewed awareness of the impacts of debt in the context of  the pandemic is a clear call for action by all people of conscience.