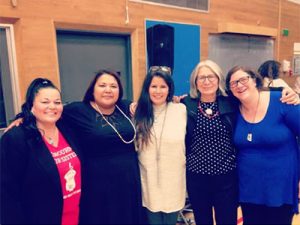 Interactive exercise walks law students through history as they learn how Canadian law throughout the years has affected Indigenous individuals and communities.

First-year law students at the University of Alberta travelled through time last week, participating in an interactive exercise designed to walk them through hundreds of years of Indigenous and Canadian history in less than three hours. The students participated in the KAIROS blanket exercise – a first for the Faculty – as part of their introductory Foundations of Law course. Dr. Hadley Friedland, Visiting Assistant Professor at the Faculty of Law, was instrumental in including the blanket exercise in the Foundations curriculum and adapting it to include Indigenous legal issues, as part of the “Other Sources of Law: Indigenous Legal Traditions and Awareness of Issues Addressed in the Truth and Reconciliation Commission (TRC)” component of the course.

“The TRC calls on law schools to ensure that our students learn about Indigenous laws, Crown-Aboriginal relations, and the devastating consequences of colonialism and intergenerational injustice,” said Dr. Friedland. “Law has played a huge role in bringing us to where we are today, so the legal profession has an important role to play in reconciliation. Having an exercise that focuses on this as part of our Foundations curriculum sends a strong message to our students. For this generation of future lawyers, Indigenous laws and legal issues are not peripheral, but rather of central importance to their legal education and ethical practice.”

The inclusion of the blanket exercise in the curriculum also responds to an important element of the University’s recently released Institutional Strategic Plan.

“The fourth objective of For the Public Good is to develop, in consultation and collaboration with internal and external community stakeholders, a thoughtful, respectful, meaningful, and sustainable response to the report of the TRC,” said Dean Paul Paton. “At the Faculty of Law, we take this responsibility very seriously. The blanket exercise – a new opportunity for us as a Faculty – is an important element of our response to this call. And by piloting the exercise, our students helped us to explore how we might thoughtfully approach these issues of importance and concern.”

Dean Paton added that the Faculty is committed to ensuring that law students enter the legal profession with knowledge of Indigenous laws and legal traditions, a firm understanding of the application of Canadian law to Indigenous peoples, and the skills to interact with respect and understanding with people from a variety of Indigenous societies.

“We need to learn about and understand these issues, both for our own legal competency, but also because of our responsibility as officers of the court and our role as leaders in Canadian society,” he said. “Our students will be encountering these issues in whichever aspect of the law they choose to practice.”

Nearly 200 first-year law students and guests gathered in the East Gym of the Van Vliet Complex on the morning of September 13 to take part in the 2.5-hour interactive exercise, which brought students together with alumni, community leaders, and experts from multiple faculties. Led by emcee Jodi Stonehouse from the Office of the Provost and the Faculty of Native Studies, the event was facilitated by Dr. Tracy Bear of the Faculty of Native Studies, and Ms. Koren Lightning-Earle, a Law alumna and president of the Indigenous Bar Association. Ms. Lightning-Earle is also the recipient of the 2016 Alumni Horizon Award, in recognition of her commitment to community service and the tremendous achievements she’s made to date in her legal career.

In his welcoming remarks, Dean Paton noted that the University’s new Institutional Strategic Plan sets out the University’s mission and values, placing particular emphasis not only on intellectual integrity, freedom of inquiry and expression, and the equality and dignity of all persons as the foundation of ethical conduct in research, teaching, learning, and service, but that the plan specifically mentions the value of creativity and innovation from the genesis of ideas through to the dissemination of knowledge. The University places great value on excellence in teaching, research, and creative activity that enriches learning experiences, advances knowledge, inspires engaged citizenship, and promotes the public good. Dean Paton noted that this exercise, a pilot project for the Faculty, was offered within the context of these priorities and encouraged all participants to keep an open mind and, in the words of a senior judge from British Columbia, to approach the morning with humility and as an opportunity to learn.

Honoured guests in attendance at the exercise included Judge Robert Philp, Chief of the Commission and Tribunals of the Alberta Human Rights Commission and Dr. Val Napoleon, Law Foundation Chair of Aboriginal Justice and Governance and Indigenous Law Research Unit Director at the University of Victoria. Mr. Robert Wanyandie of the James Gang Drummers offered an opening prayer song and drumming.

To begin the exercise, students were instructed to remove their shoes and stand on Turtle Island – the name many Indigenous communities have for Canada – as represented by the many blankets laid out on the gymnasium floor. The facilitators then handed out scrolls of paper to the students, each of which detailed a different historical occurrence or piece of Canadian law that impacted the Indigenous peoples of Turtle Island. Throughout the exercise, facilitators moved amongst the students as scrolls were read aloud, removing blankets to coincide with the readings on the scrolls that detailed how British and Canadian law and legislation had removed land from the Indigenous peoples of Turtle Island. Students were instructed that they could move to prevent the removal and rolling up of the blankets, to represent when Indigenous peoples resisted the removal of their land.

The powerful visual of Turtle Island as it shrank represented for students the effects of the British North America Act and the Indian Act on the Indigenous peoples, as well as the effects of diseases brought by European settlers. As the numbers of Indigenous peoples on Turtle Island declined due to the effects of violence and disease, students were told to leave the remaining blankets and move to the perimeter of the gym. The representation of the effects of residential schools was particularly arresting, as a number of students were removed from the blankets onto a single blanket apart from the rest. Students were then removed from that single blanket to represent the loss of life that occurred during the residential school system. The exercise then turned to some of the small but important gains that have been made to work towards justice and reconciliation, thanks to the efforts of Indigenous people and legal allies. At the conclusion of the exercise, the students broke into small groups to discuss the exercise and what they had learned. Robert Wanyandie then brought the morning to a close with another song, to which many students round-danced.

“I found the blanket exercise to be an extremely valuable learning activity,” said Bernadette McMechan, a first-year law student. “The participatory nature of the activity honoured a variety of learning styles, which made the learning intellectually engaging, emotionally impactful, and deeply memorable. Re-learning history from an Indigenous perspective is important for us as students of law because it encourages us to be open-minded, to take into account a variety of perspectives, and to analyze how the law has been used as a tool of oppression.”

Following the exercise, students returned to the Law Centre for lunch and a panel discussion on the theme of “Looking Forward: Indigenous Laws, Governance and Legal Practice” with Dr. Napoleon, Matt Wildcat from the Faculty of Native Studies and the Department of Political Science, sole practitioner Koren Lightning-Earle, Crown Prosecutor Kara Barker, and 3L student Jenna Broomfield.

The exercise forms an important part of the Faculty’s multi-faceted response to the call in both the Institutional Strategic Plan and the TRC report, for which alumnus Wilton Littlechild was a commissioner. Enhancing the Faculty’s existing course offerings in Aboriginal law and the Aboriginal Law Students’ Association Speaker Series in March, the 2016-17 academic year will also see the launch of an innovative experiential learning opportunity early in the New Year, the first of its kind in Canada.