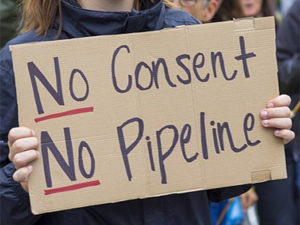 KAIROS Canada recognizes the importance of the August 30 Federal Court of Appeal decision to overturn the approvals for the Trans Mountain pipeline expansion project.  For many years, KAIROS has stood with First Nations communities and others in expressing profound concern for the deep ecological impacts and violation of Indigenous rights associated with this and similar projects.

While not cited by the Federal Appeals Court, the decision also marks a victory for our climate.  The Trans Mountain expansion project would lock Canada into a trajectory of high emissions for decades to come.  At a time when decisive and swift action is needed to reduce global emissions, the federal government’s support of this project is indefensible.  KAIROS upholds its 2009 policy calling for no further approvals for tar sands projects, including pipelines for exporting bitumen and liquefied natural gas. The transition to a clean energy economy in Canada is already underway. The federal government must focus its investments in clean energy alternatives and support affected oil and gas workers and their families during this transition.  This is an economic imperative that will support Canadians for generations to come.

Indigenous communities across the country have been leading the way to a clean energy future by participating in renewable energy projects.  Some of these partnerships generate enough solar, wind, hydro or bio-energy to sell back to the grid – reducing our reliance on fossil fuels.  In some jurisdictions, particularly Alberta, Indigenous communities and organizations are partnering with oil and gas workers who are eager to transfer their skills to the renewable energy economy. These are the kind of initiatives that will drive just, inclusive and sustainable development for Canada.

While we are grateful for the Court’s decision, we know that this is not the end.  Finance Minister Bill Morneau responded to the Court’s decision by reaffirming the federal government’s position that the Trans Mountain pipeline expansion is in the national interest and that they want to make sure the project proceeds.  What form of meaningful consultation can take place now if the federal government has already made up its mind about the outcome?

The Court’s ruling confirms that meaningful consultation must include the accommodation of concerns expressed by First Nations communities and an open mind as to the outcome.  If additional consultation reveals that Canada should not move forward with the Trans Mountain expansion project, KAIROS hopes that the federal government will respect these outcomes.

We lift up all Indigenous leaders, members of the KAIROS network, faith leaders, and allies who continue to unite their concerns in action and prayer.  We give thanks to the Indigenous-led movement that stands in defence of the lands, waters and climate.  May we continue to walk together in our journey towards right relations with one another and with the earth.