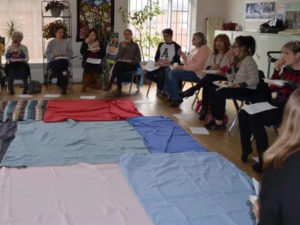 Originally published on the Richmond Hill United Church (RHUC) blog on May 15, 2016, by Joanne Scofield

Richmond Hill United Church (RHUC) hosted a KAIROS Blanket Exercise on May 15, 2016, as part of the Lunch and Learn Series. We welcomed participants from the RHUC congregation as well as community members. There was an amazing turn-out of thirty-six people, from a wide range of ages.

Before we began, we acknowledged that we were on land that from about 1300-1550 was home to Iroquois, and sometime in the late seventeenth and eighteenth centuries became home to the Mississauga. The land is also part of Treaty 13.

The Blanket Exercise is an interactive activity that teaches about the relationship of Indigenous and non-Indigenous peoples in Canada. The Exercise sparked a lot of good conversation and reflection.

Blankets are laid out to represent Turtle Island, before European contact.

Participants step on to Turtle Island

Blankets at the end of the Exercise.

We were honoured to have Dr. Bob Phillips, who’s Spirit name is Great Bear, open the Exercise with a prayer and traditional Smudge and close with a Talking Circle. Bob is a non-status urban Micmac, an Elder and Traditional Pipe Carrier. We appreciated his wisdom and leadership for the Exercise.

A big thank you also to our volunteers, Rev. Linda Butler and Fred Worm who were narrators and Kiara Fabro who read the part of the European.

The Blanket Exercise was developed by KAIROS, in 1997 as a teaching tool to raise awareness of the nation-to-nation relationship between Indigenous and non-Indigenous peoples in Canada. It teaches a history of Canada that most people never learn. It also provides context for the Residential Schools apologies from Canada and from Churches, including the United Church of Canada. As well, the Blanket Exercise speaks to the Truth and Reconciliation Commission’s Call to Action, #62, Education for Reconciliation.

To sign the KAIROS Winds of Change petition, that encourages provincial and territorial governments to implement Call to Action #62 click here.

For more information about the KAIROS Blanket Exercise click here.

For more information about the United Church of Canada’s Apology on Residential Schools click here. 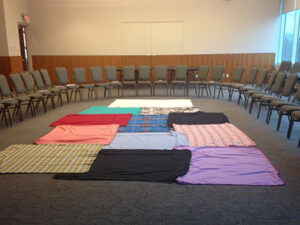 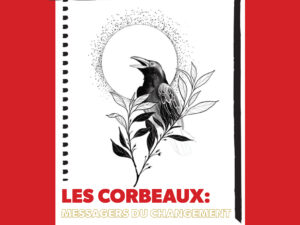