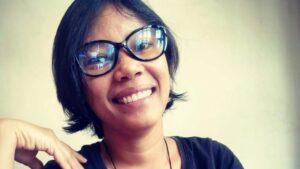 Zara Alvarez, a brave, well-known human rights defender who worked with a member organization of KAIROS partner Ecumenical Voice for Human Rights and Peace in the Philippines (EcuVoice), was fatally shot in Bacolod City on the Negros Island on August 17, 2020.

KAIROS has a longstanding partnership with EcuVoice, a consortium of civil society organizations, including the National Council of Churches in the Philippines (NCCP), and is currently supporting their Human and Gender Rights project.

Zara Alvarez’s tragic death continues a pattern over the last year during which the human rights situation has significantly deteriorated,  as outlined in the July 17th KAIROS blog “Take action to end attacks against human rights defenders in the Philippines.” The Philippine government has increasingly made use of the process of “red-tagging,” which labels many human rights organizations as “front organizations of local communist terrorist groups” resulting in severe consequences including arbitrary arrests and killings, as witnessed with Zara Alvarez.

Some organizations affiliated with EcuVoice that have made statements regarding the assassination of Zara Alvarez, include the NCCP, the National Union of People’s Lawyers, and KARAPATAN.

The World Council of Churches Pilgrim Team who visited the Philippines and met Zara Alvarez in August 2019 has also issued a statement: facebook.com/nationalcouncilofchurchesinthephilippines

Zara was a grassroots-level human rights activist, a community health worker and member of the Church People – Workers Solidarity who worked locally on Negros Island with KARAPATAN, a human rights organization and a member of EcuVoice. She demonstrated courage and commitment to justice, human rights, and faith despite the red-tagging and death threats. She was a former political prisoner whose charges were finally dropped in 2014; and, she continued to serve among the politically and economically vulnerable farmers and sugarcane workers of Negros.

Zara Alvarez’s assassination calls for renewed and urgent action for human rights in the Philippines.  KAROS joins EcuVoice and partners in reiterating the following calls to the Philippine government:

Zara Alvarez drew inspiration for social justice from the church, but her life was cut mercilessly short.  We remember her and all the recent human rights defenders who have been victims and survivors in the Philippines as democratic freedoms are systematically stripped away by the regime.

[i] https://www.facebook.com/notes/national-council-of-churches-in-the-philippines/message-of-the-members-of-the-wcc-pilgrim-team-visit-to-the-philippines-on-the-k/10213860149976679/ Message of the members of the WCC Pilgrim Team Visit to the Philippines on the killing of Zara Alvarez of August 20, 2020 on NCCP Facebook page