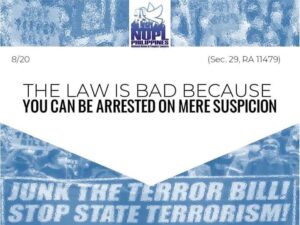 Over the last year the human rights situation has significantly deteriorated in the Philippines. The government has increasingly made use of the process of red-tagging, used to identify many human rights organizations as “front organizations of local communist terrorist groups.” The consequences of red-tagging are dire. Some activists and human rights defenders who are red-tagged have been subjected to arbitrary arrests and killings.

As the COVID-19 pandemic took hold globally, the government of the Philippines responded with a militarized lockdown which limited the distribution of food by humanitarian actors and resulted in many more arrests, contributing to the further overcrowding of prisons. In March, Human Rights Watch identified the overcrowding of prisons as posing an elevated risk of the transmission of the virus.

On June 30, 2020, the United Nations High Commissioner for Human Rights, Michelle Bachelet, formally presented her report (HRC/44/22) to the 44th Session of the United Nations Human Rights Council, in accordance with the Iceland-led resolution in July 2019, on the situation of human rights in the Philippines. The report indicates that the underpinning focus on national security threats – real and inflated –  in Philippine law and policy “has led to serious human rights violations, reinforced by harmful rhetoric from high-level officials.”  UN officials investigating these human rights complaints have consistently been denied access to the country by the government.

During June and July, the government of the Philippines took additional steps to ratify and implement anti-terror legislation that risks further targeting human rights defenders and even humanitarian workers. Bachelet’s report indicates that the Anti-Terrorism Law of 2020 would “weaken human rights safeguards, broadens the definition of terrorism and expands the period of detention without warrant.” The Bill was signed by President Duterte on July 3, 2020 and the situation has deteriorated rapidly since. In a press release following the ratification of the law, members of EcuVoice expressed their “grave concerns that the new, draconian measure will only worsen the Philippine government’s human rights abuses and violations.”

Our partners at EcuVoice have told us that things might get even worse before the law takes effect on July 18th.  On July 6th Jen Nagrampa, the National Vice Chairperson of GABRIELA, an alliance of women, was arrested following the falsified or “trumped-up” charges of double murder. Furthermore, there was the attempted arrest of KARAPATAN Secretary General Tinay Palabay, who had just posted bail also on the retaliatory trumped-up charges filed against her and several other human rights defenders by National Security Adviser Hermogenes Esperon, and the assassination of a public prosecutor. KARAPATAN-Bicol spokesperson Rev. Dan San Andres, a United Church of Christ of the Philippines pastor, was also arrested on the same warrant of arrest as Jen Nagrampa’s. On July 10th, the Philippines’ largest broadcaster ABS-CBN, which has been critical of the Duterte regime, was shuttered by Congress members loyal to the President. Amnesty International Philippines’ Human Rights Officer Wilnor Papa said, “What happened to ABS-CBN today is yet another nail in the coffin of press freedom in the Philippines. It sets a worrying precedent that Duterte’s administration can and will clamp down on any person, organization or media outlet critical of his administration.”

The rapid deterioration of the human rights situation demands immediate and urgent action.

KAIROS stands in solidarity with EcuVoice, our partner in the Philippines which is:

KAIROS is also collaborating with partners in Canada and the Philippines  to inform decision makers of the need to act immediately to protect human rights defenders and suspend the Anti-Terrorism Act by signing an open letter from Canadian civil society organizations to Canada’s Minister of Foreign Affairs François-Philippe Champagne asking that Canada support the recommendations in Michelle Bachelet’s report.

We need your support for this work to gain attention in Canada’s Parliament.

Help us to underscore the need for urgent action to protect human rights in the Philippines by:

Asking your Member of Parliament to:

Thank you for taking action for human rights in the Philippines.